Guido Sant’Anna has arrived in the UK to collect a fine 1833 Iorio violin, loaned to him by the Menuhin Competition Trust, with the support of the Caris Foundation.

Guido Sant’Anna, a Junior prizewinner from Geneva 2018, will be in London this week to collect a violin loaned to him by the Menuhin Competition Trust. Guido was the first Brazilian violinist selected to compete in the Menuhin Competition since the Competition was founded in 1983, and his impressive performance earned him Junior 6th Prize and the ARTE Concert Online Audience Prize. The Trust was so impressed by Guido’s performance that, with the support of the Caris Foundation, they have organised the loan of a fine 1833 violin made by Iorio, the famous Naples violin maker, in order to continue supporting this talented young artist.

At age five, Guido began playing the violin with the help of his family. He debuted as a soloist at only seven years old, and since then has performed numerous times with the Filarmonica Bachiana Orchestra, under the direction of João Carlos Martins. He has also performed with Maestro Julio Medaglia, Erika Hindrikson, and Edson Beltrami, and is currently a student of Elisa Fukuda, sponsored by the Cultura Artística Institute. Since his incredible performance in Geneva, he has performed with numerous orchestras across Brazil, including the Orquestra Sinfônica Municipal de São Paulo, Johann Sebastian Rio, Camerata Sesi de Vitória in Espirito Santo, Orquestra do Festival Virtuosi in Pernambuco, Camerata UFMT in Mato Grosso, Orquestra da ULBRA in Rio Grande do Sul, and Orquestra da UFRN in Rio Grande do Norte. In addition to these already impressive engagements, he has also participated in the Perlman Music Programme and Sarasota Camp in the USA.

To mark the occasion of the loan, the Embassy of Brazil in London will be hosting an event to honour Guido and the kind support of the Caris Foundation on 18th June. 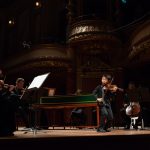 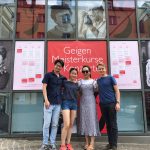 15 July 2019 – Summer updates from our prizewinnersNews