The Menuhin Competition Geneva 2018 In Summary

The Menuhin Competition Geneva 2018 achieved several particular milestones, among them the submission of 317 applications from young violinists representing 51 nationalities, an ever-increasing standard of performance from the competitors, a significantly more extensive outreach and special events programme than has previously been achieved, dramatic growth in media coverage, live-streaming and worldwide audience (with 675,000 live views of the streaming and 13.8 million replay views between 12th April – 22nd May 2018), a wider range of concerts for 2018 prizewinners than ever before and overwhelmingly positive feedback received from all angles.

You can find out all about the Menuhin Competition Geneva 2018 here, read the In Summary report here, and you can re-live the fantastic performances given by our competitors on our YouTube channel here. 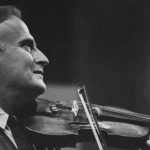