We’re pleased to share information about our applications for the Menuhin Competition Richmond 2020!

We are delighted to announce that we have broken our previous record and received a total of 321 applications for the Menuhin Competition Richmond 2020!

We have received entries from the top conservatories and music schools around the world, as well as new applications from Albania, Egypt, Macedonia, Thailand and the UAE. Applications were submitted by 152 Juniors and 169 Seniors, meaning that we have received more applications from Junior candidates than in previous years. 59% of our applicants identify as female, and 41% identify as male – which shows a slight rise in male candidates as compared to the 36.5% of applicants for Geneva who identified as male.

“I hope to meet new friends from other countries” – an applicant from Canada on what inspired her to apply for the Menuhin Competition.

While our applicants come from all over the world, representing 37 nationalities, there are a large number of young American violinists eager to represent their home country on the stage in Richmond, Virginia. One in three of our applicants lives in the USA, with applications coming from all over the country and overseas US territory Guam – this is over a 10% rise in applications from young Americans.

Other countries represented heavily by applicants include China, Japan, South Korea and Australia. 16% of our applicants are Chinese nationals, 10% are South Korean nationals, and 9% are Japanese nationals. We have received 15 applications from Australian Juniors – a large increase from previous years.

“My mother started teaching me piano, which I really enjoyed but I became frustrated quickly because my hands were too small to make the sounds I heard on the radio! My mother knew violins came in small sizes and enrolled me into classes.” – an applicant from the USA on what inspired her to begin playing the violin.

Our applicants are also getting younger. We received twice as many applications from violinists aged 10 years old or younger this year than we did for the previous Competition – from 8 applications in Geneva, this number has soared up to 16, which may have been inspired by the joint winners of the Geneva 2018 Junior 1st Prize, who were aged 10 and 11 respectively during the Competition.

The results of our survey also suggest that young musicians are starting to play the violin even younger – almost 20% of applicants began to play the violin at 3 years old or younger. A further 26% started their studies at the age of 4.

“Watching my sister play violin and seeing the confident and proud look on her face is probably one of my earliest memories.” – an American applicant on his early musical memories.

“I love everything about playing the violin. To me, it is my best friend at all times.”  – an American applicant on what she enjoys about music.

Only a relatively small number of applicants said they came from families where one of their parents play the violin – just 15% have a violinist parent. However, one in three applicants do come from families where other musical instruments are played in the home. Applicants reported a wide range of instruments being played at home, including piano, cello, clarinet, oud, organ, trumpet, biwa, bagpipes, erhu and sitar.

“To play the violin is a fantastic way to live a life with music.” – an applicant from Norway on what she loves about playing the violin.

Artistic Director of the Menuhin Competition, Gordon Back, and the pre-selection jury, including Vice Principal at Barratt Due Institute Oslo, Alf Richard Kraggerud, and renowned violinist and Professor of Violin at London’s Guildhall School of Music and Drama, Simon Blendis, are currently reviewing every application received this year to select the 44 competitors who will go on to participate in the Menuhin Competition Richmond 2020 in May of next year. We expect to announce our competitors in January of next year, and look forward to meeting each of the young people selected to compete.

We would like to take this opportunity to thank each of our applicants for all of the hard work and dedication that has gone into their applications.

“My mother inspired me to start playing – when I was little, she would take out her violin and let me play it for 10 minutes every night. Those 10 minutes were pure joy.” – a Polish-American applicant on his early memories of playing the violin. 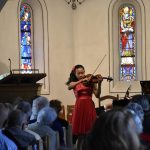 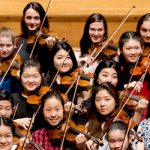