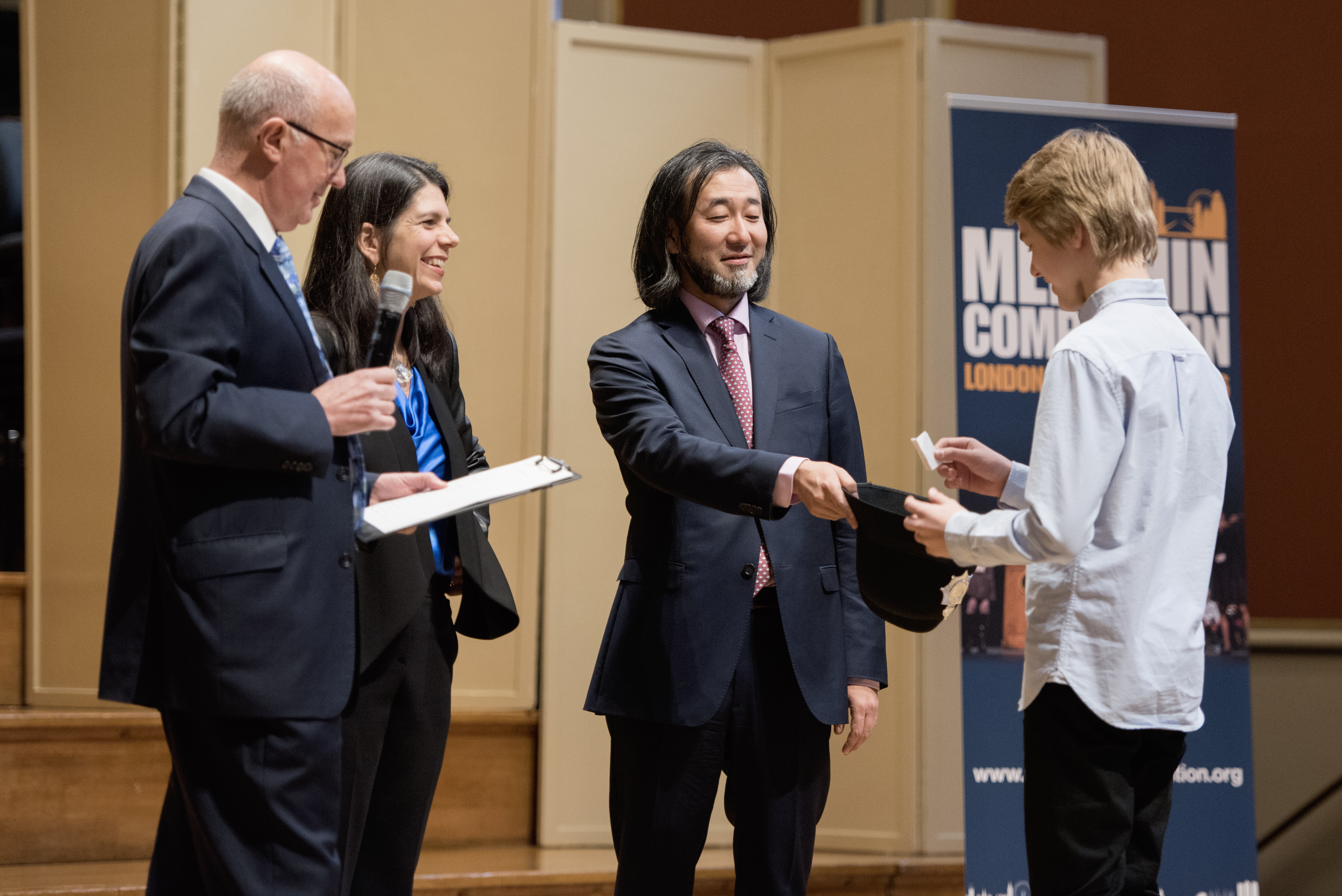 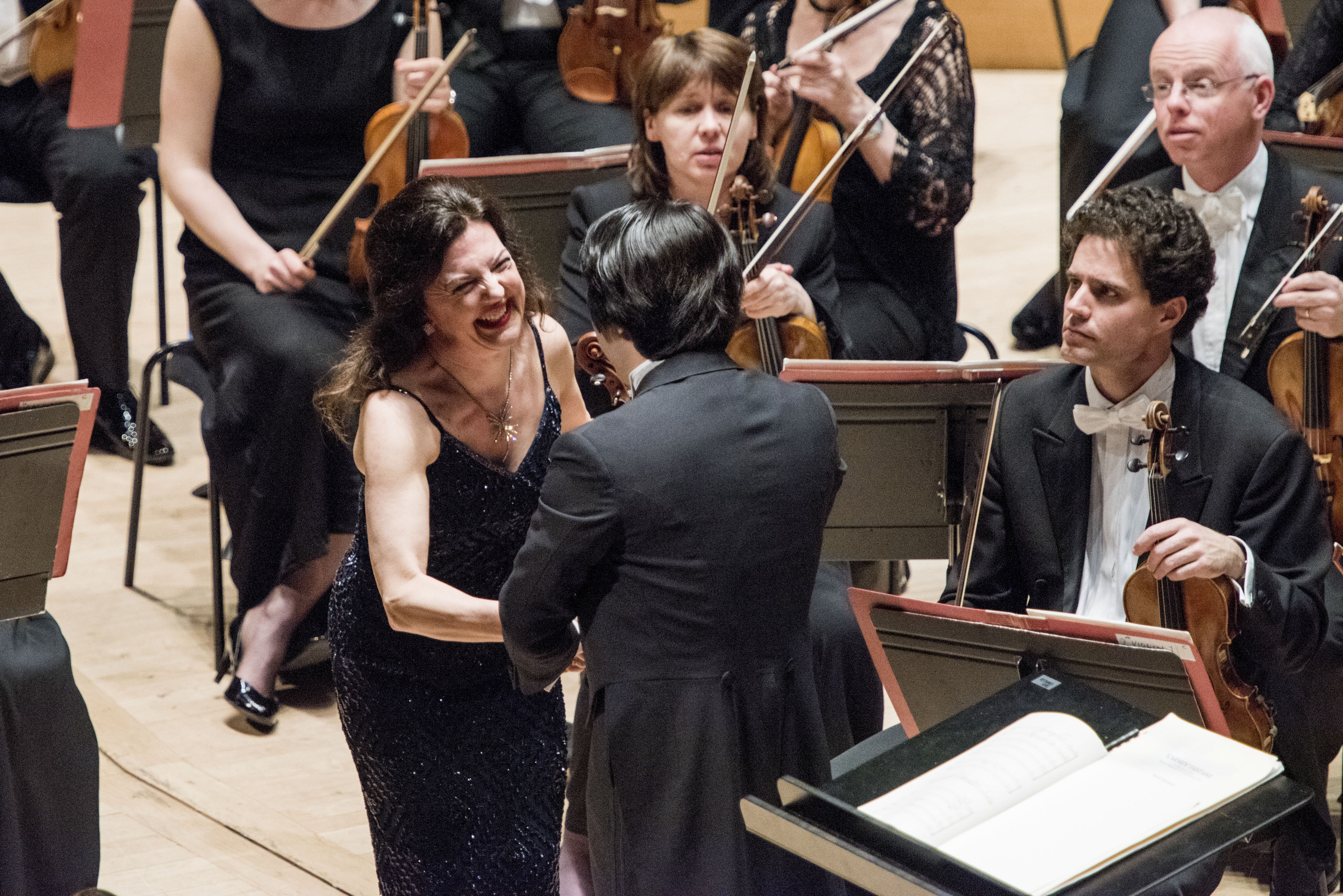 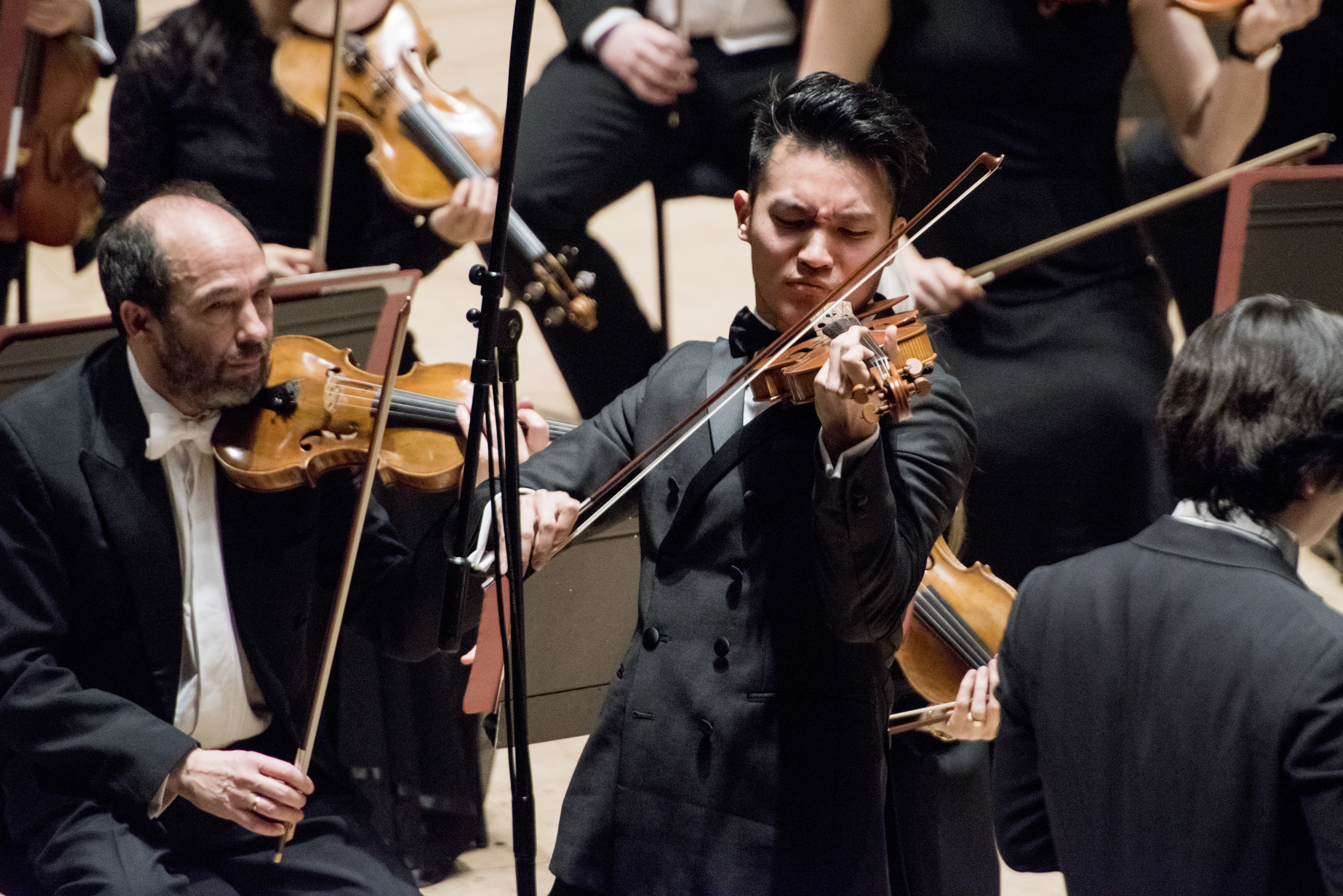 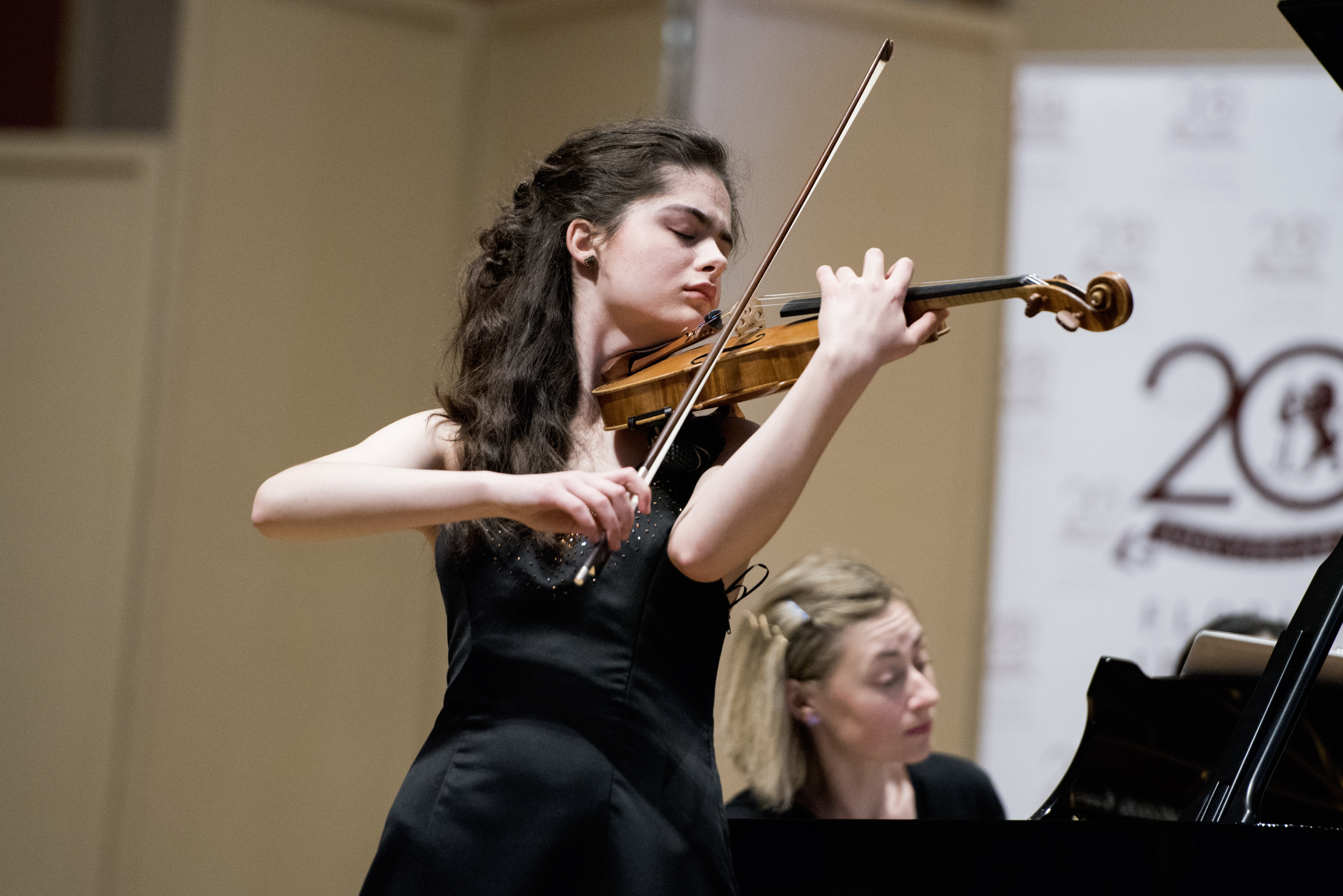 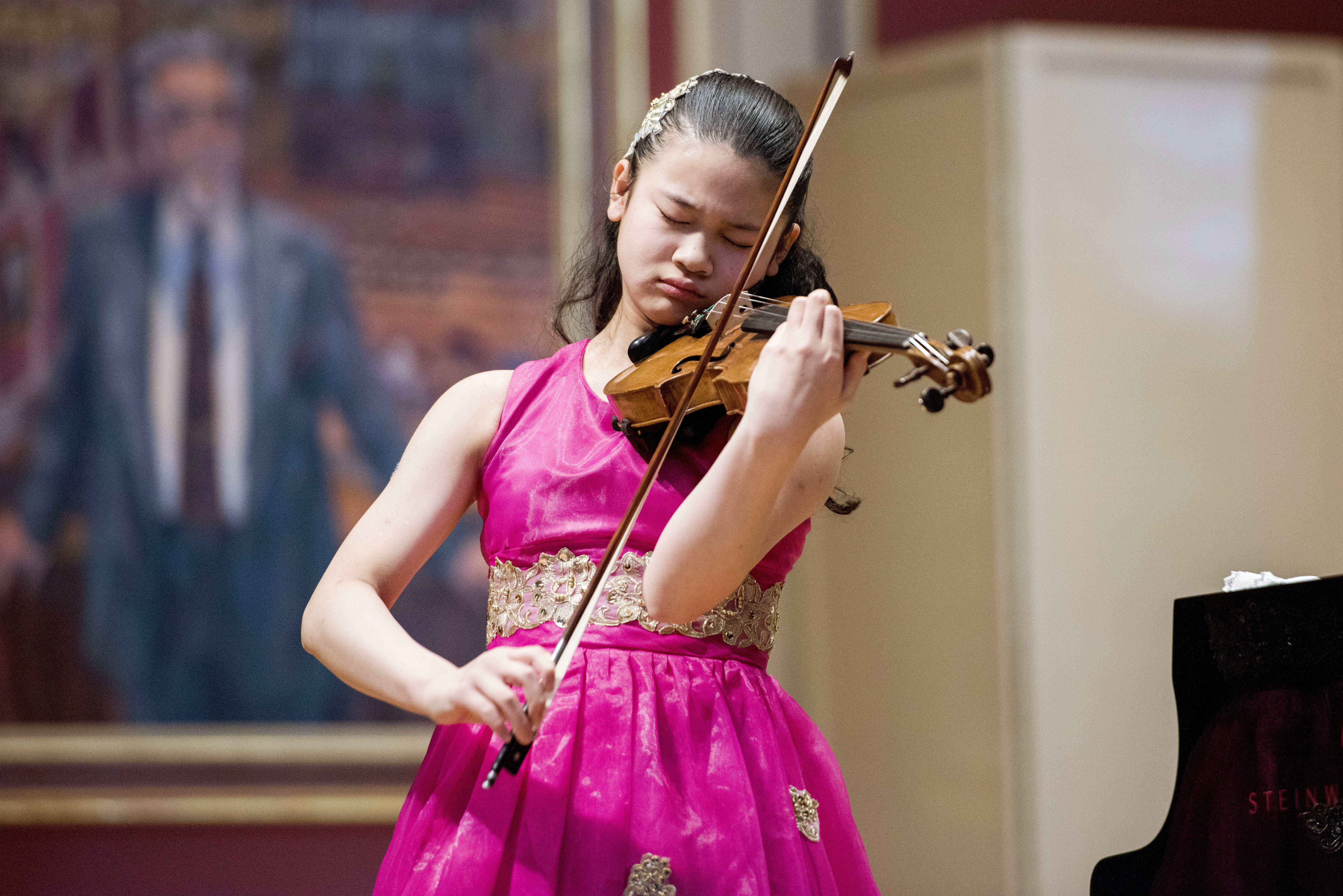 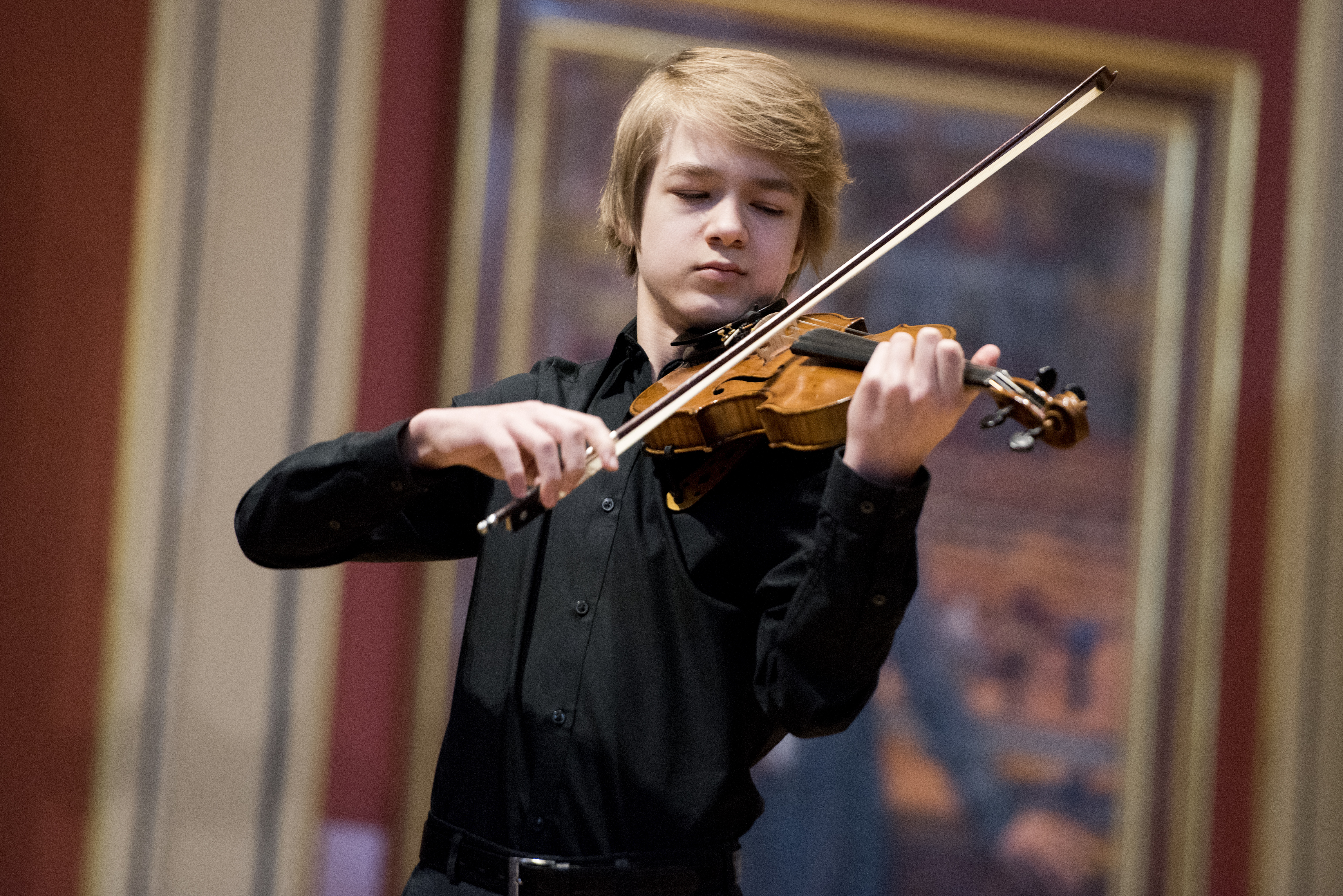 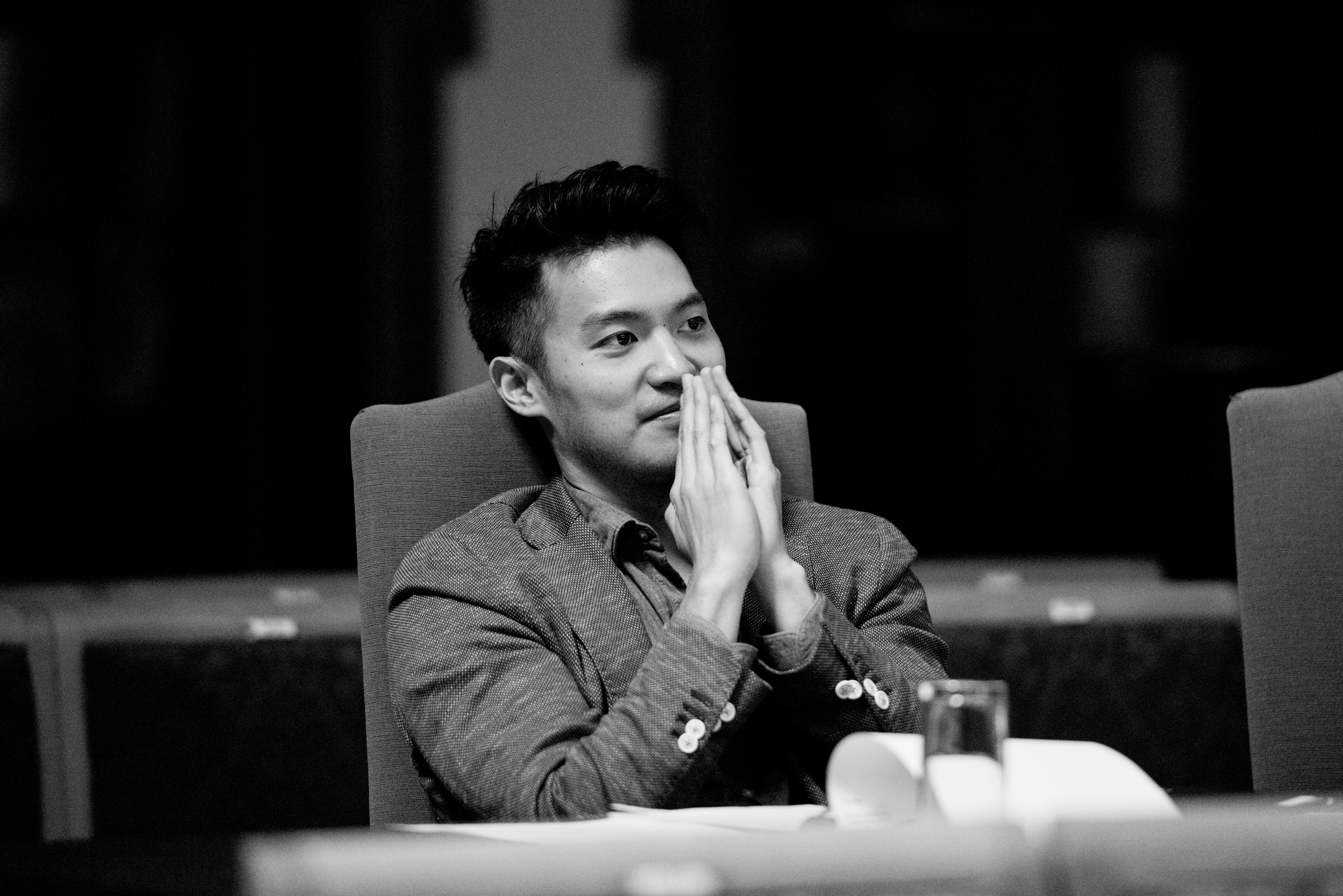 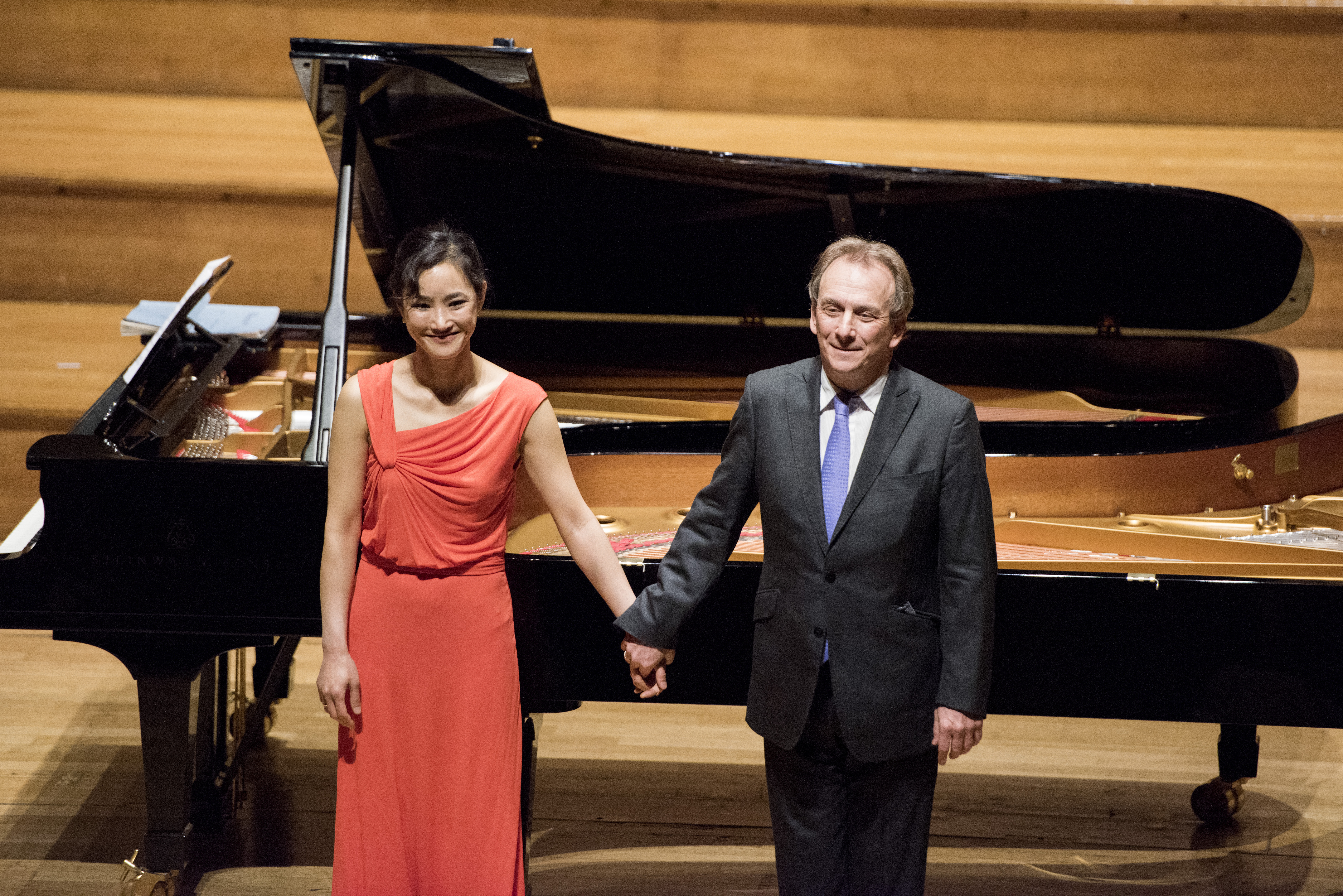 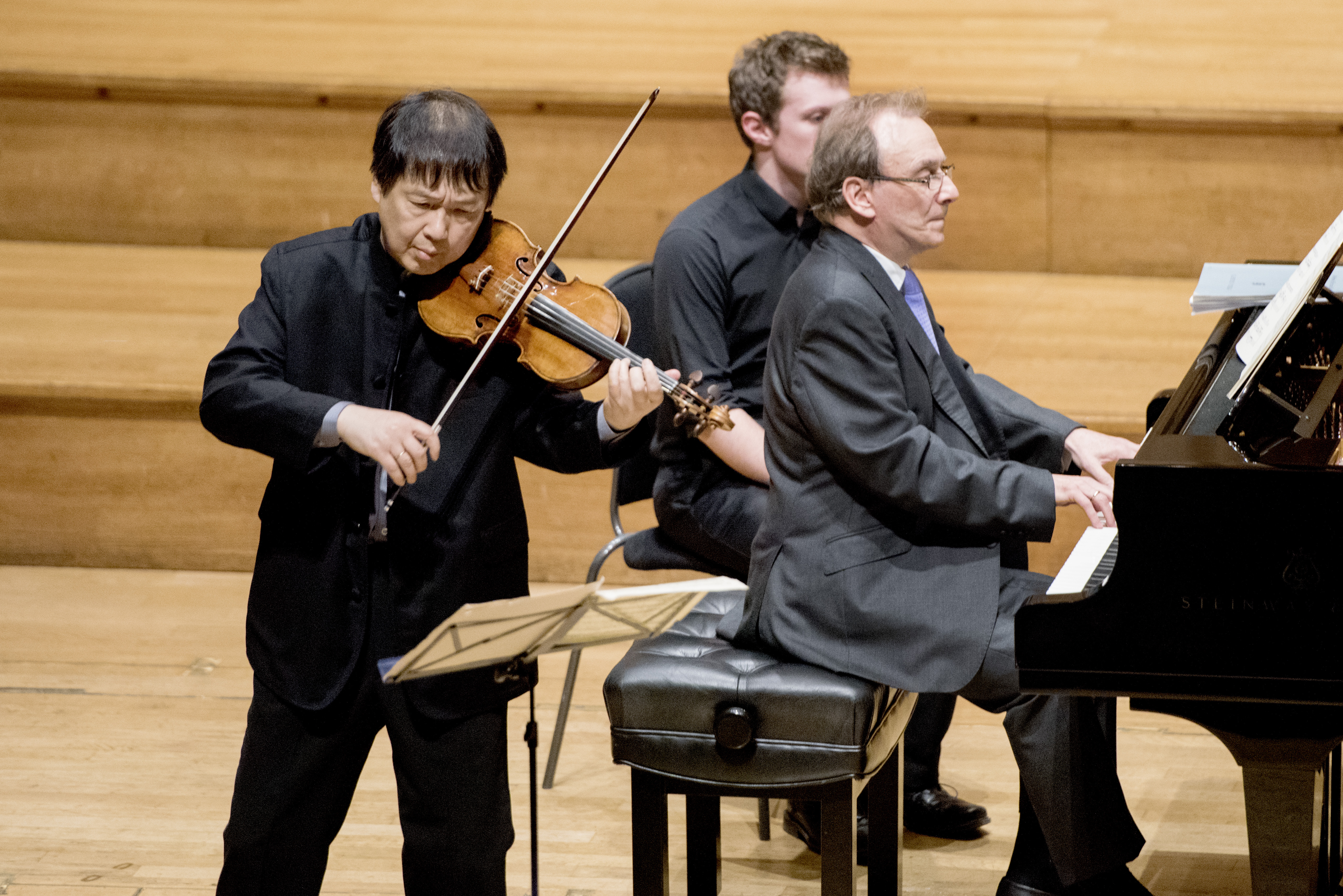 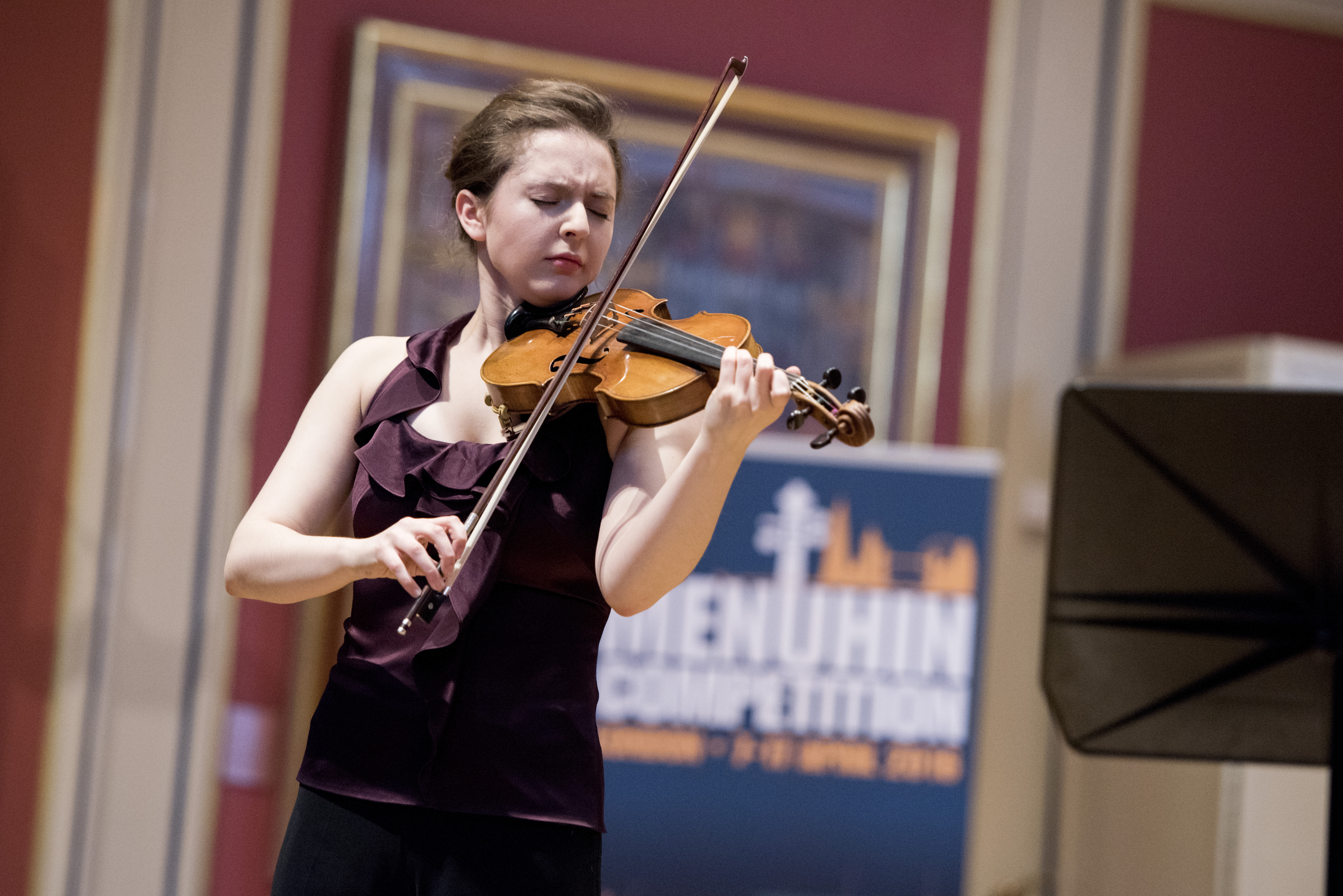 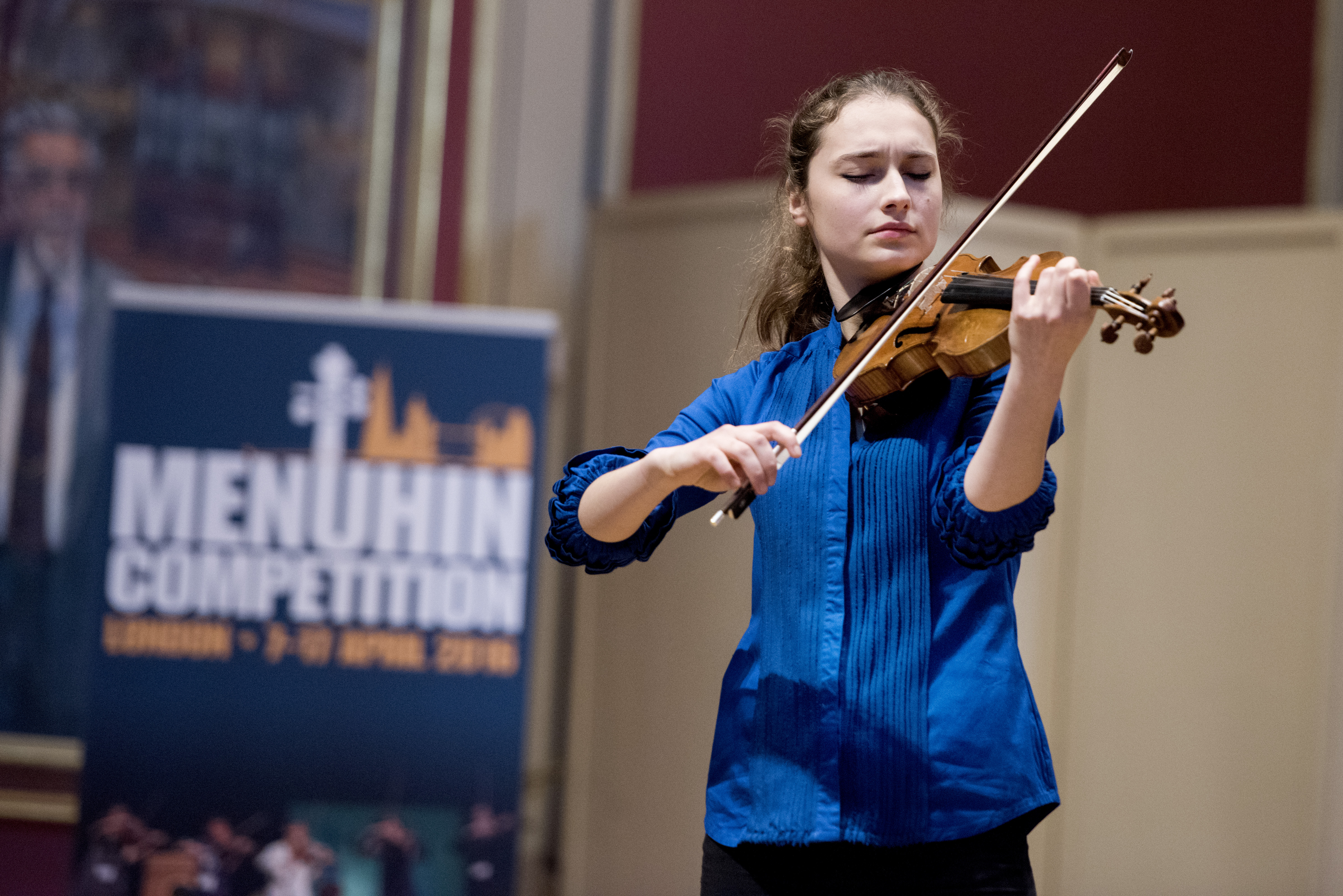 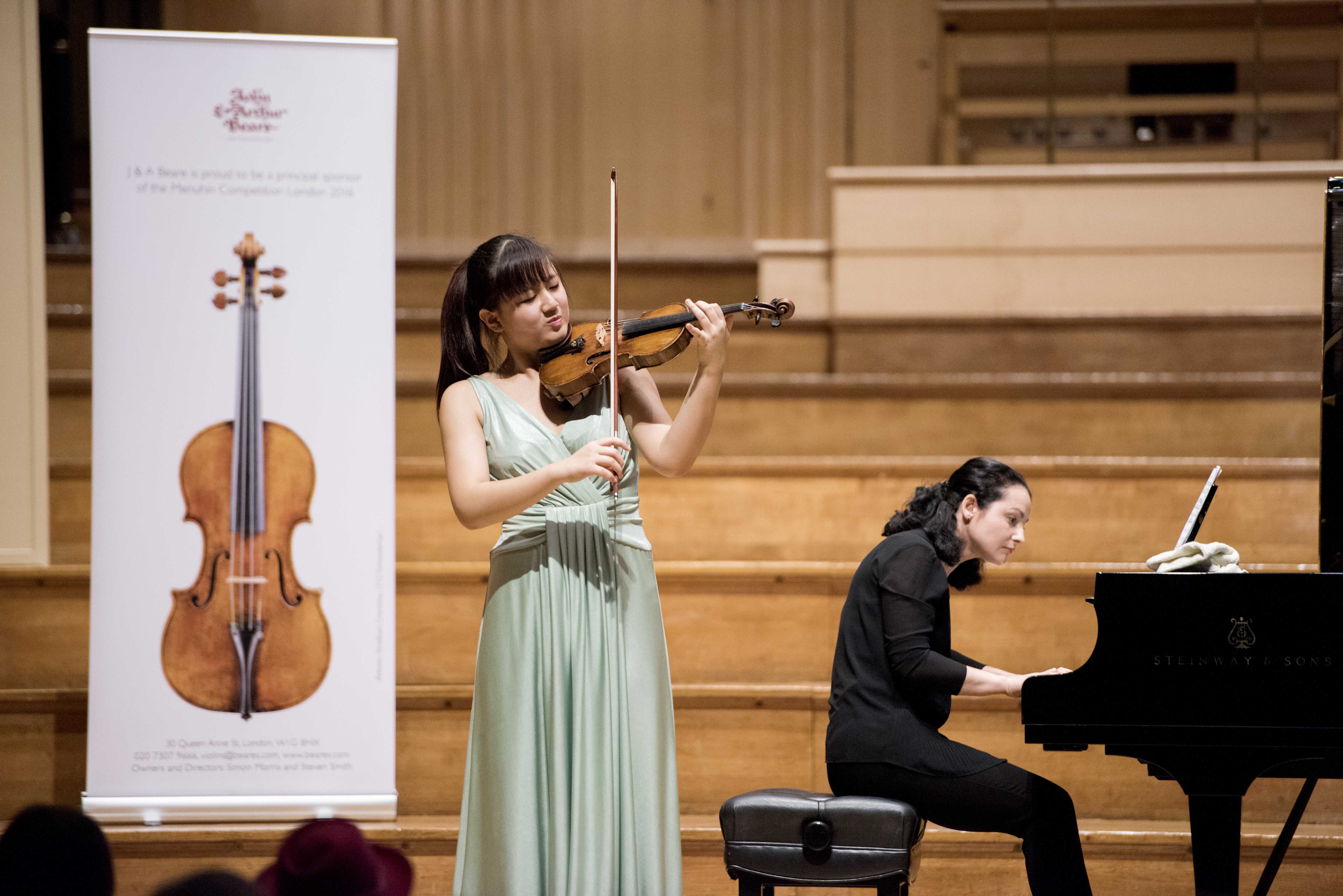 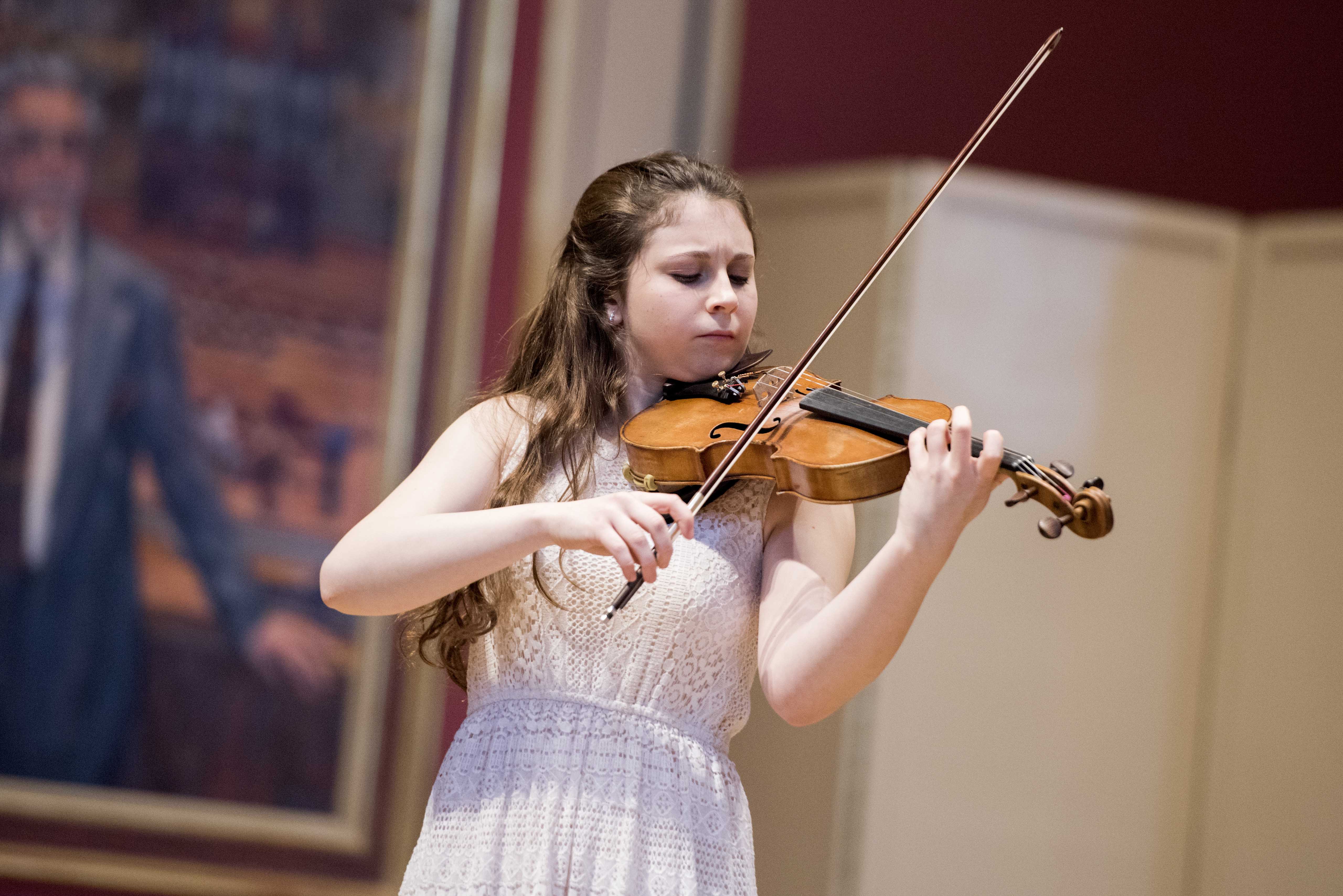 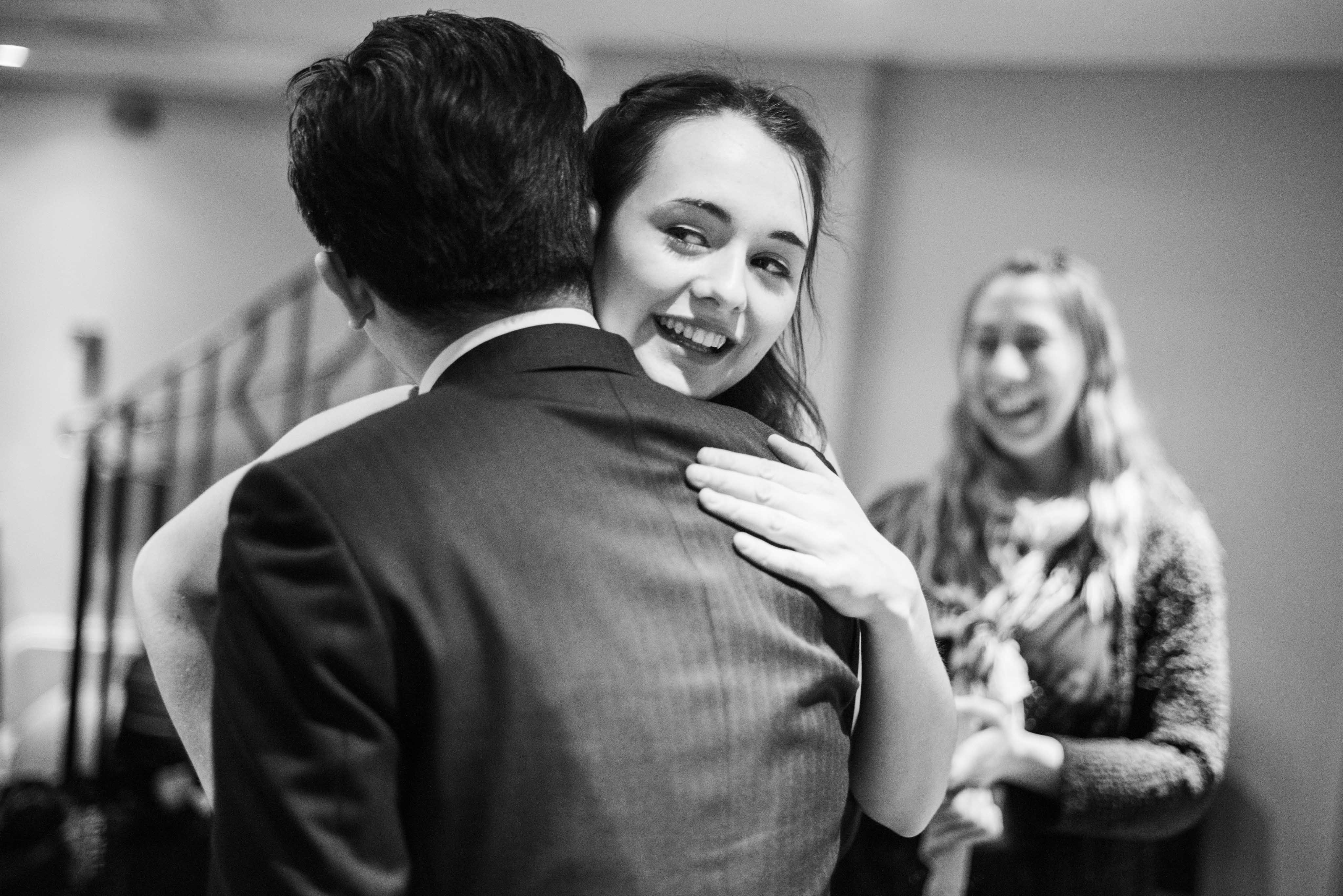 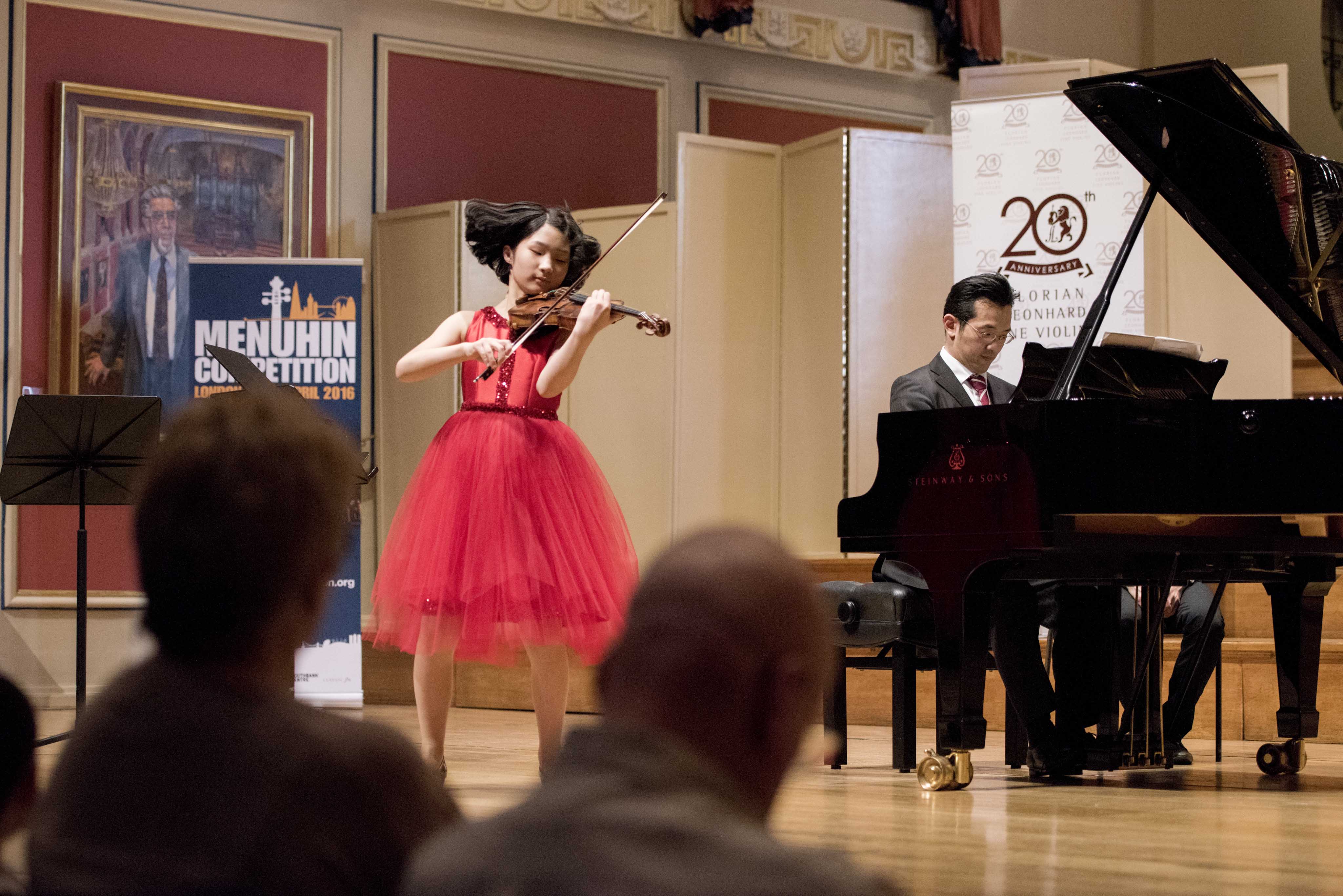 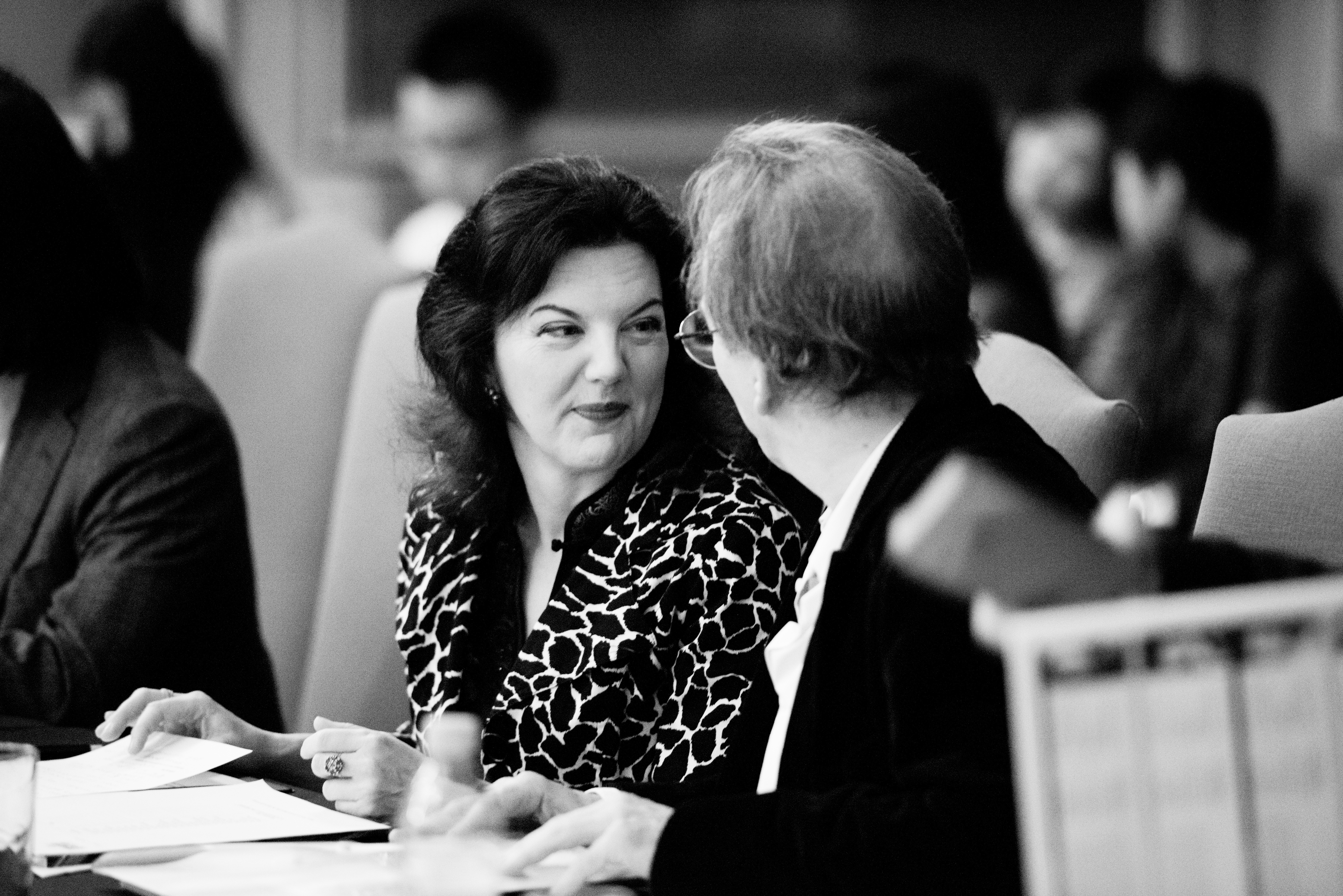 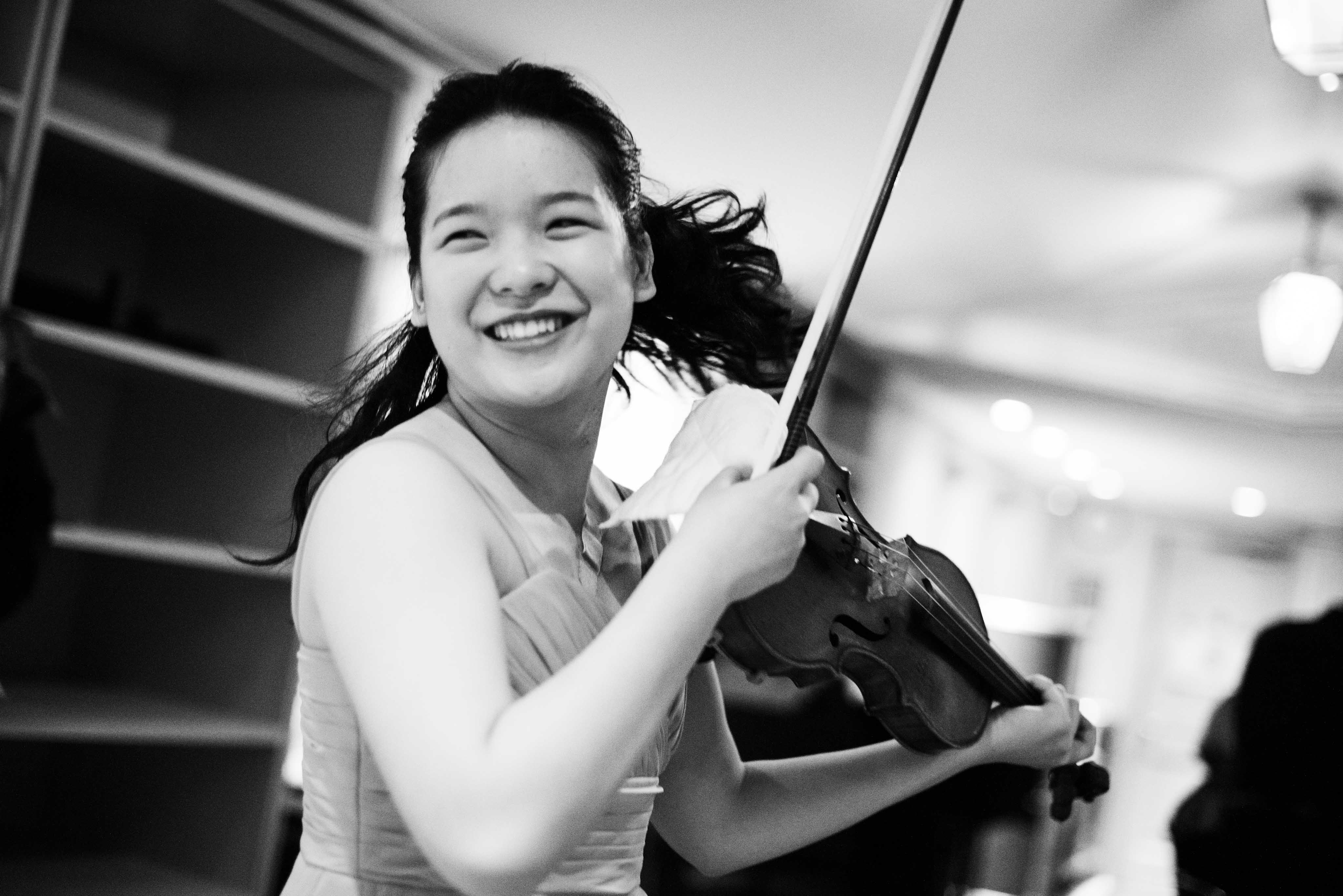 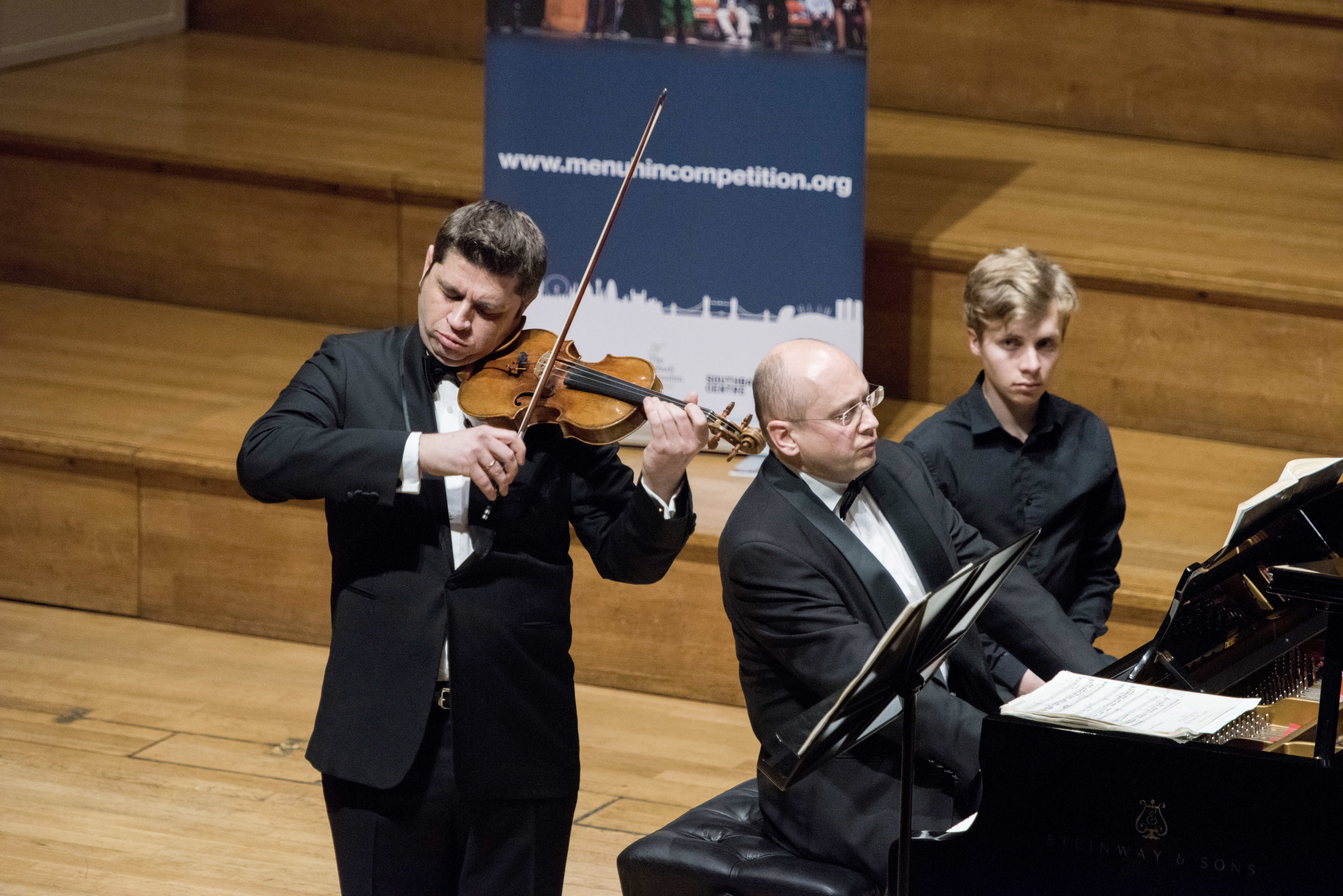 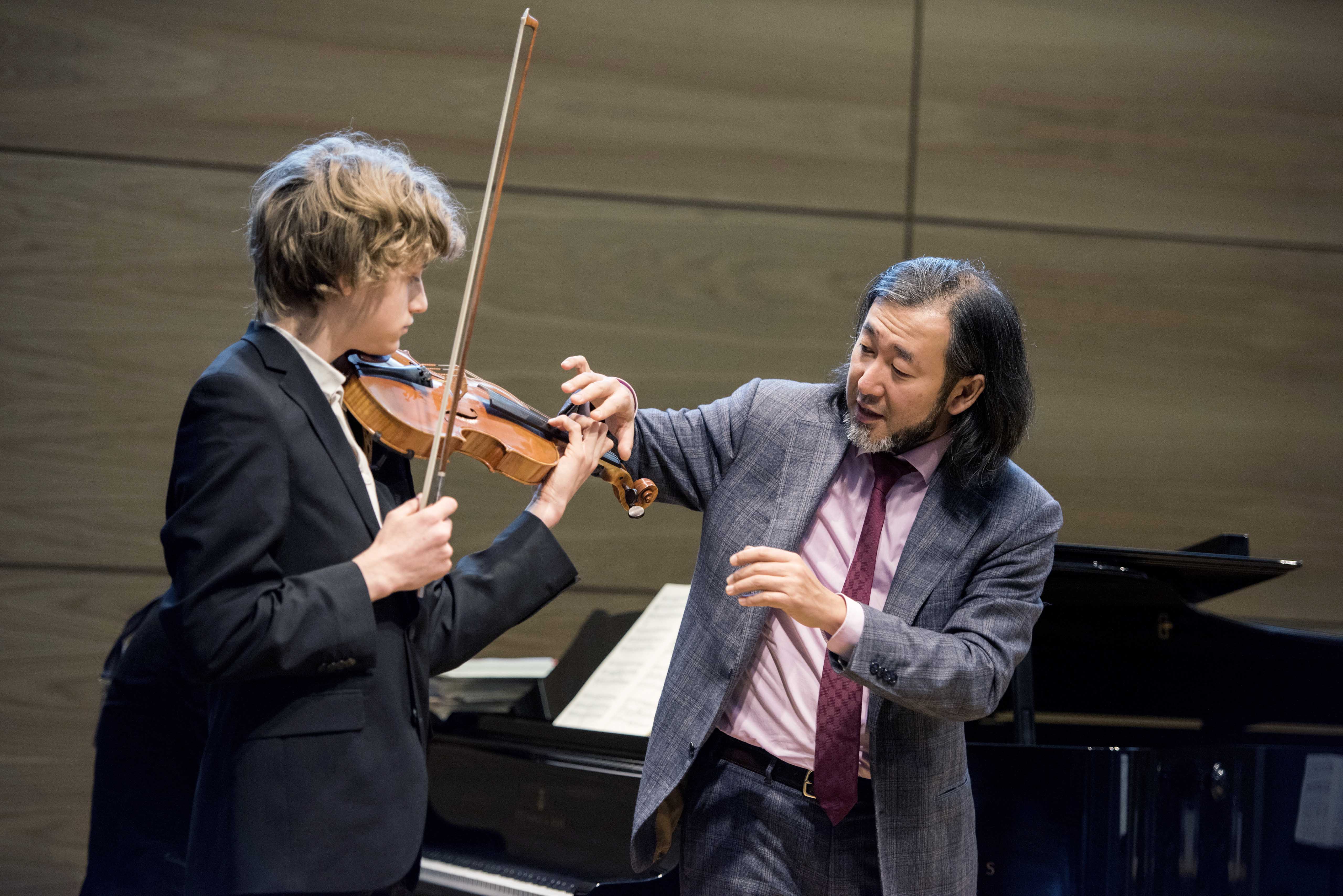 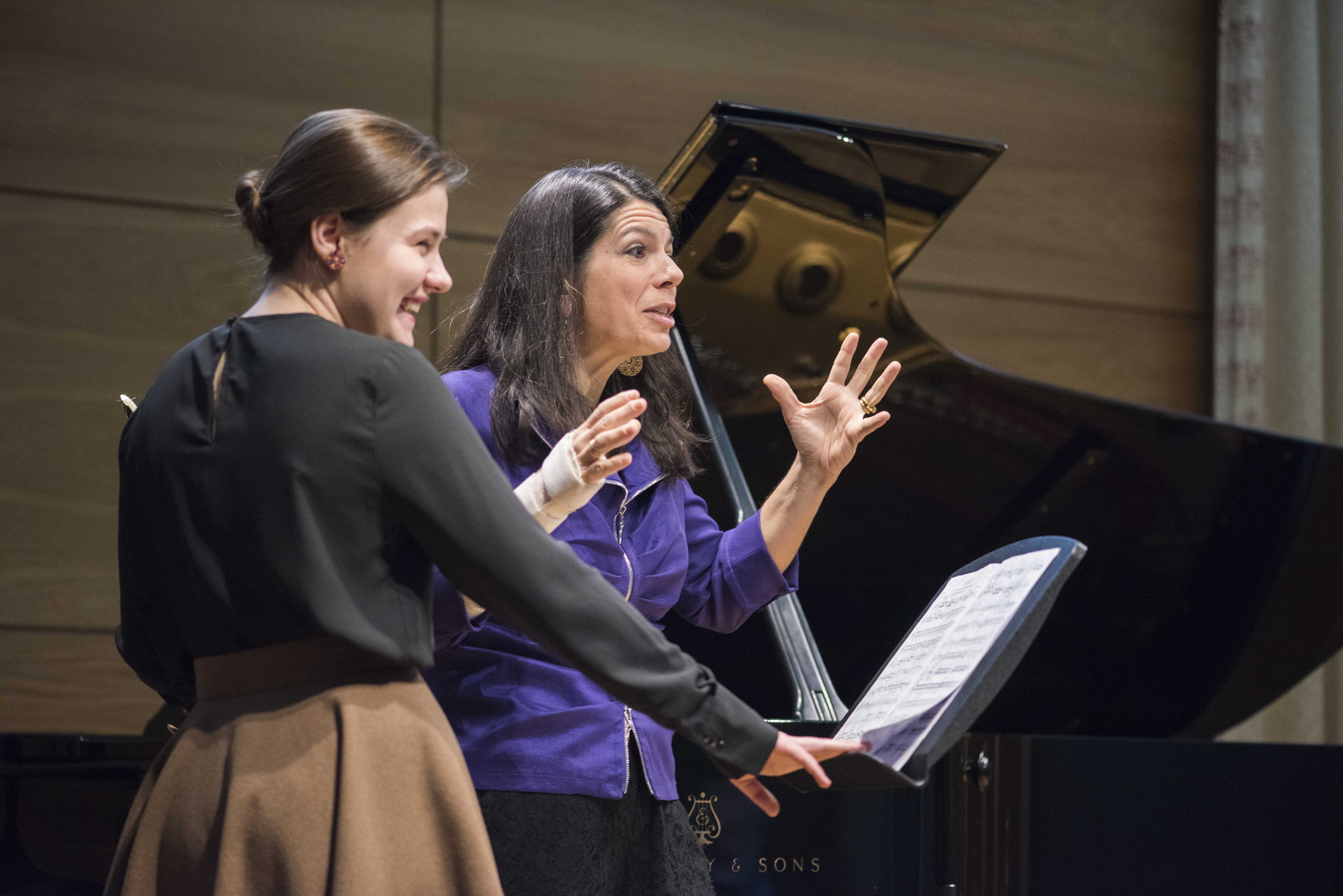 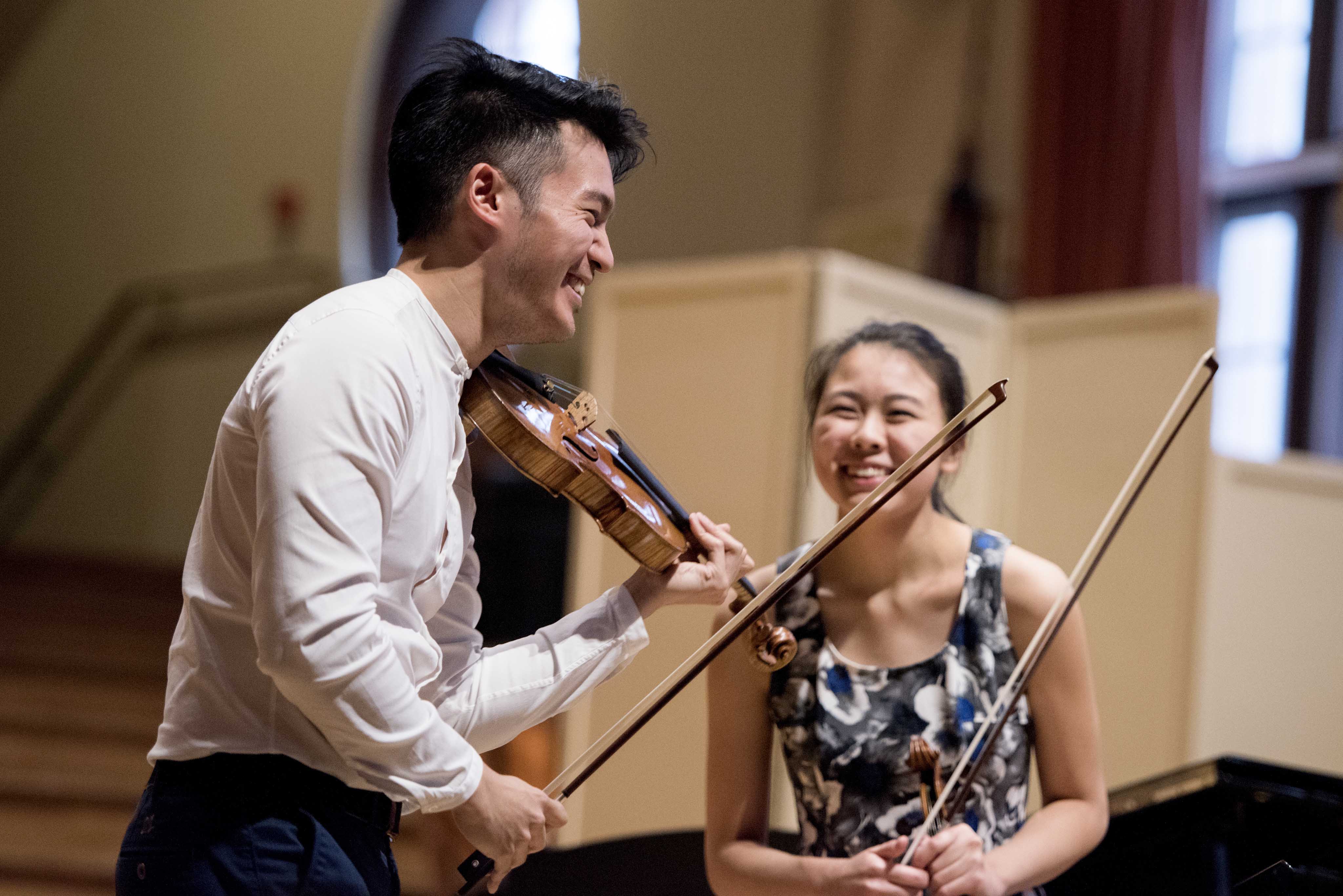 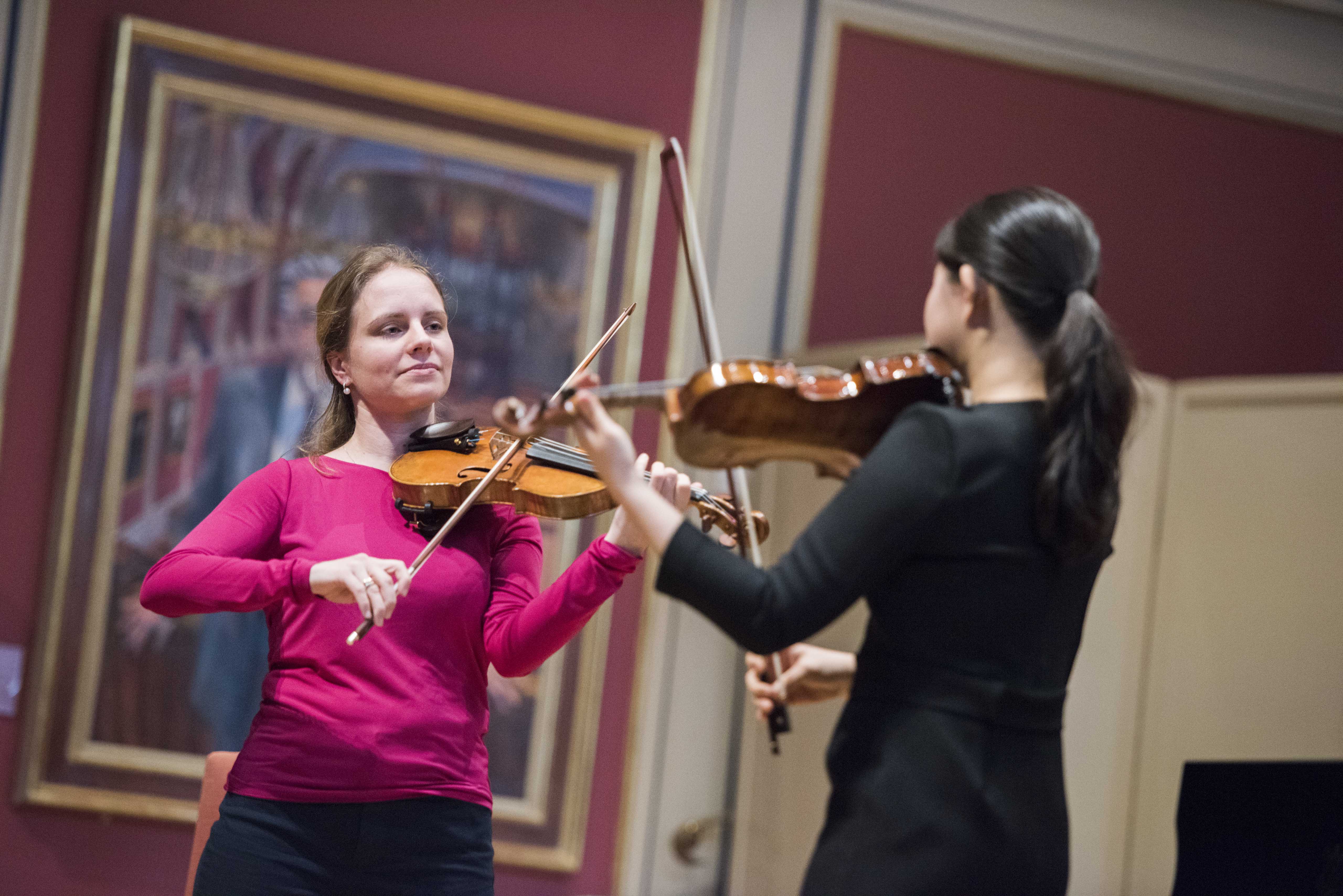 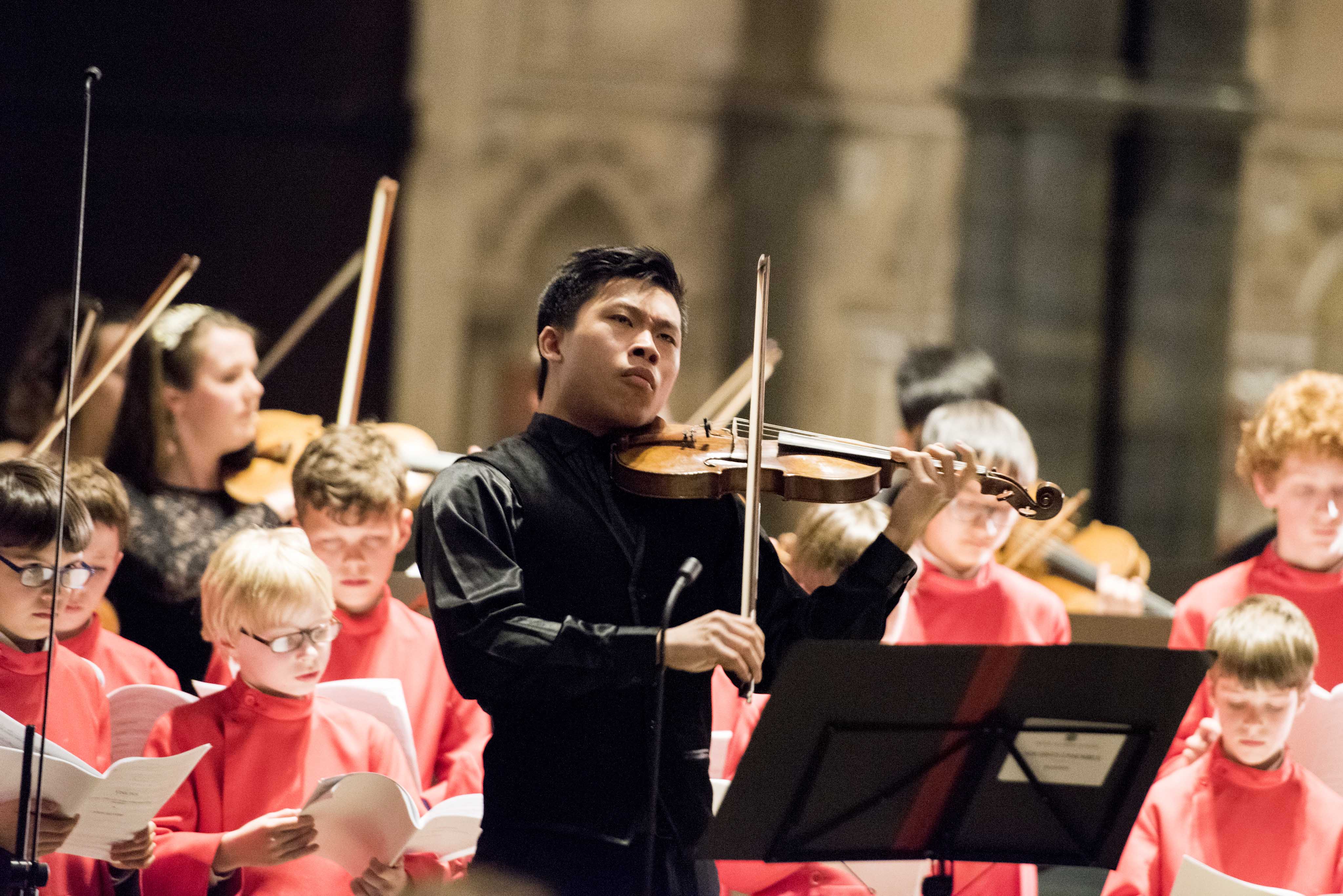 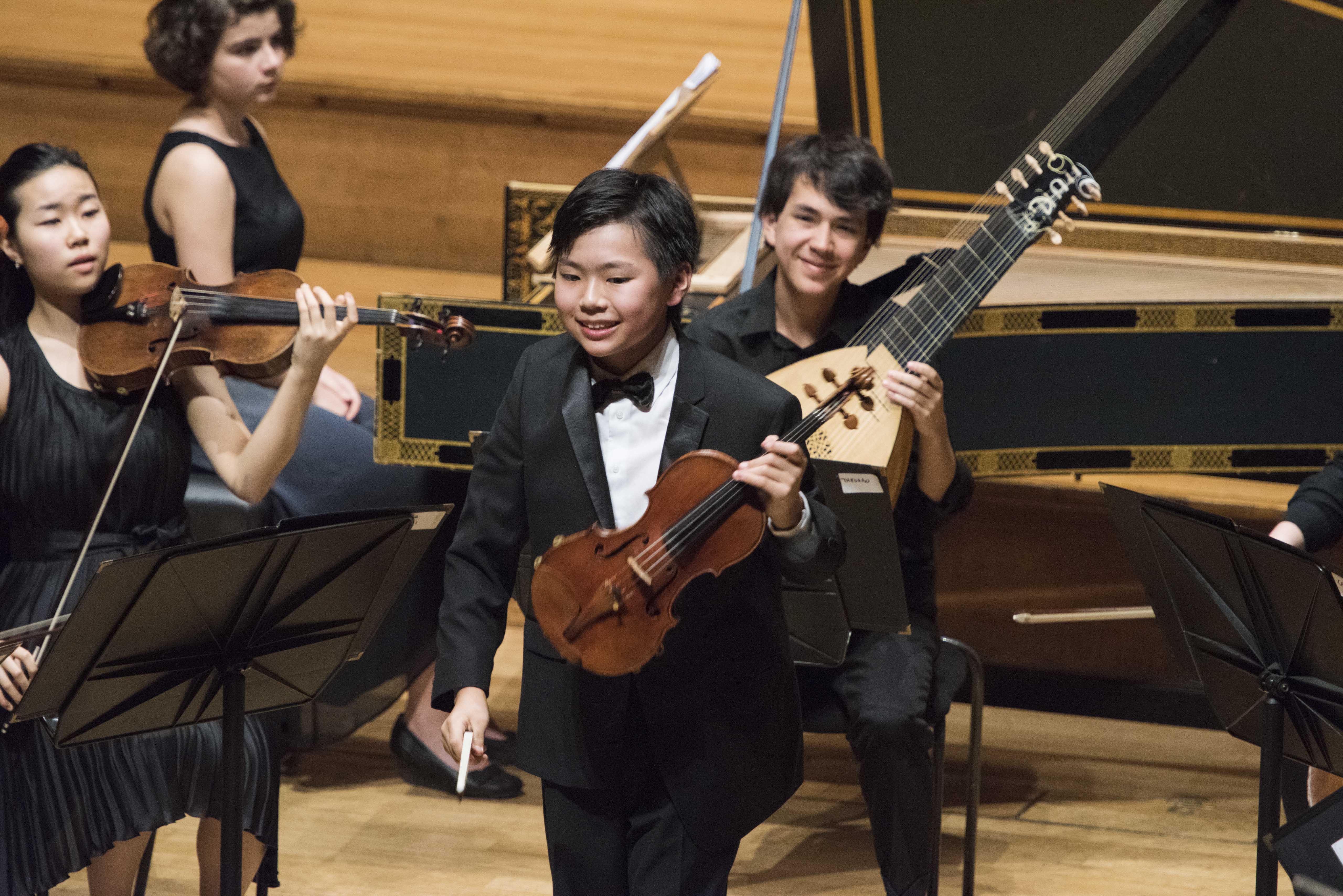 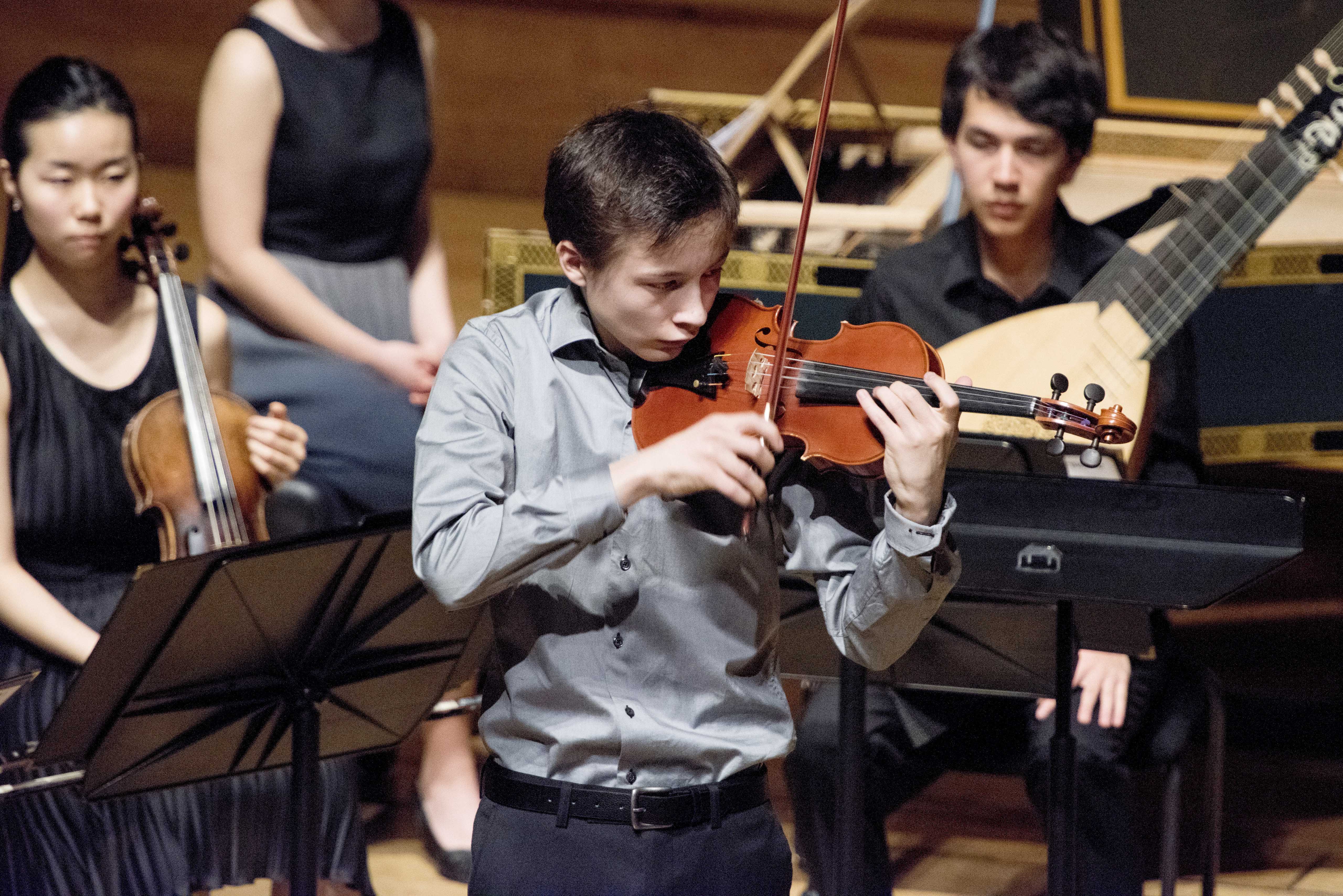 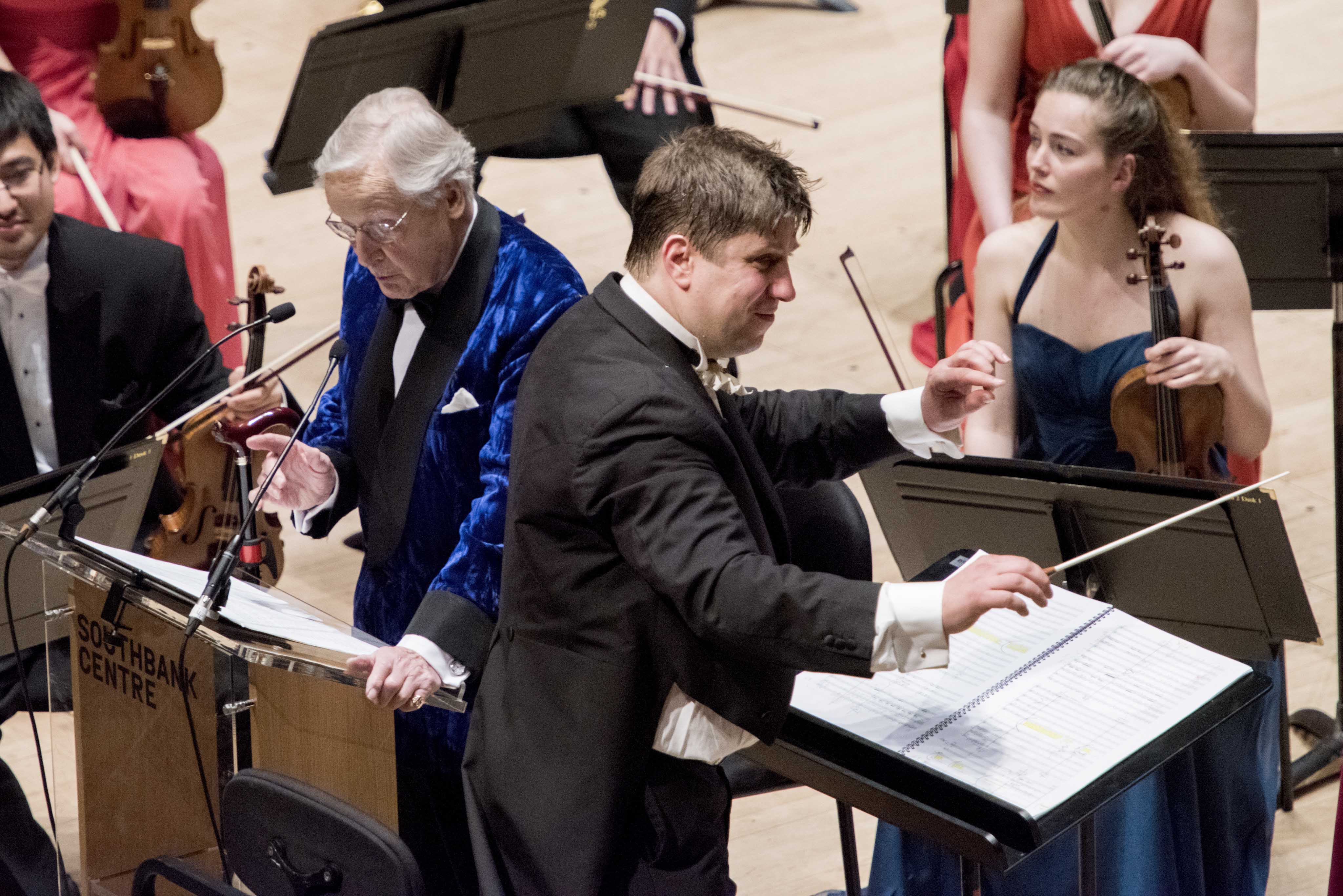 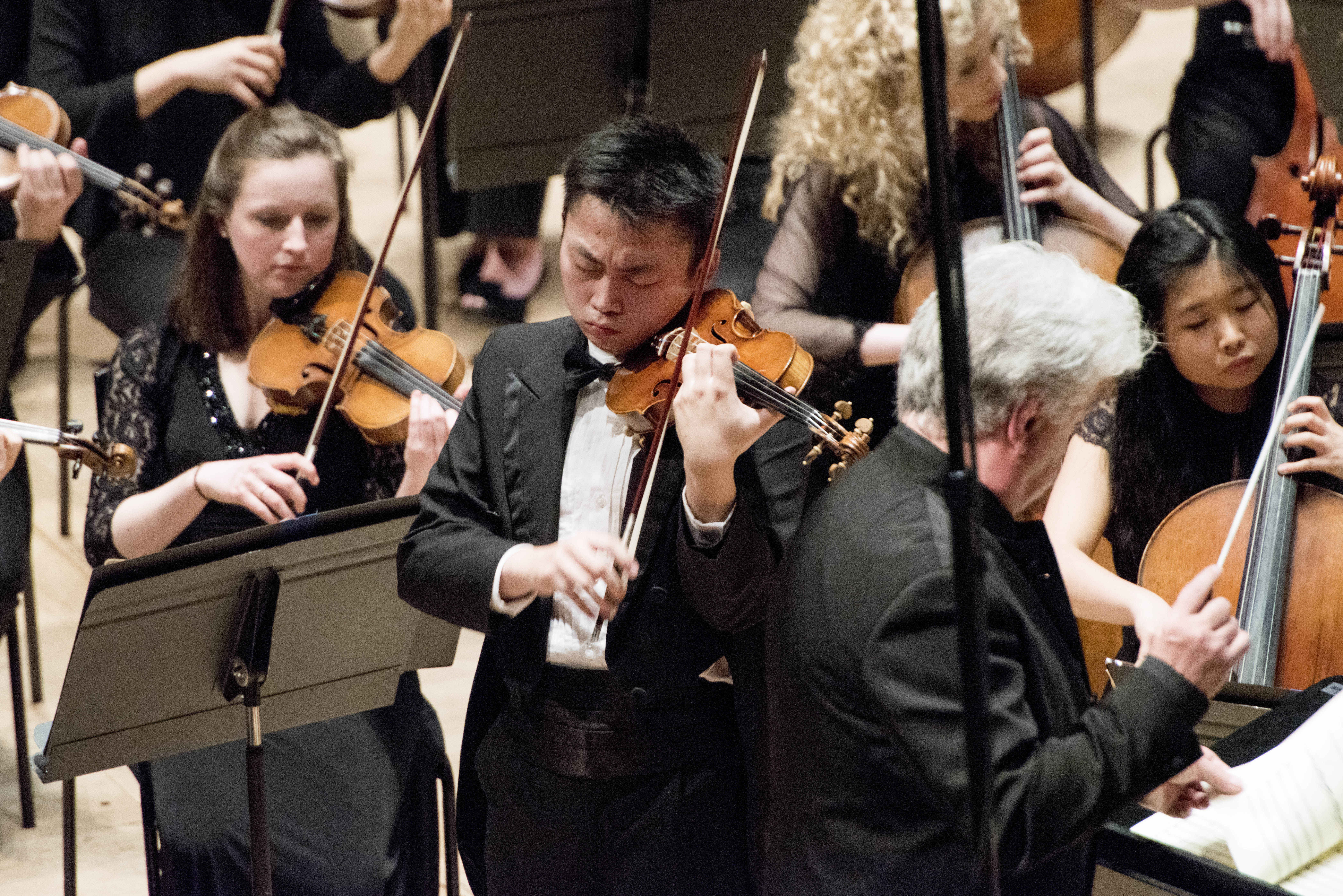 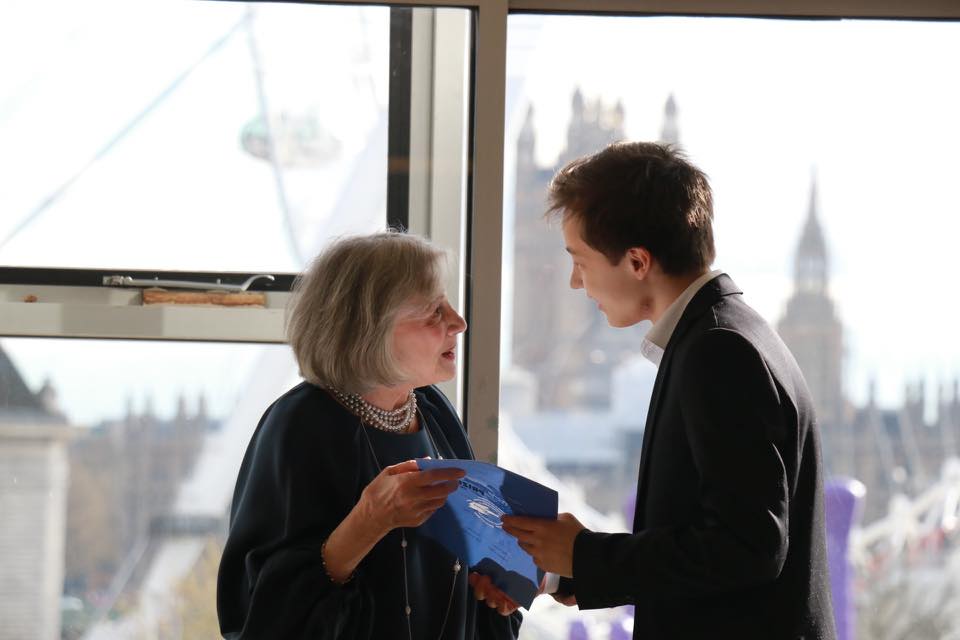 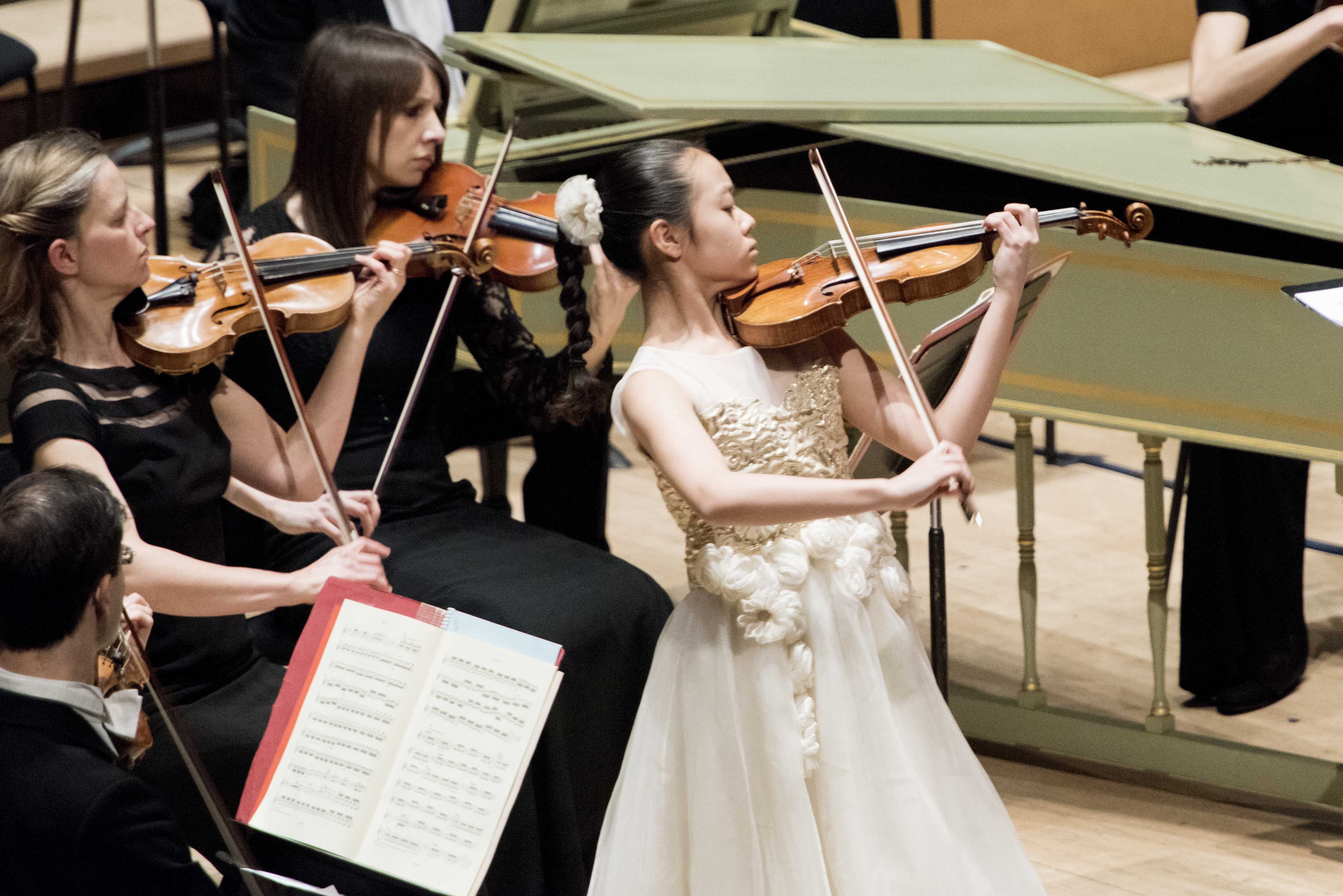 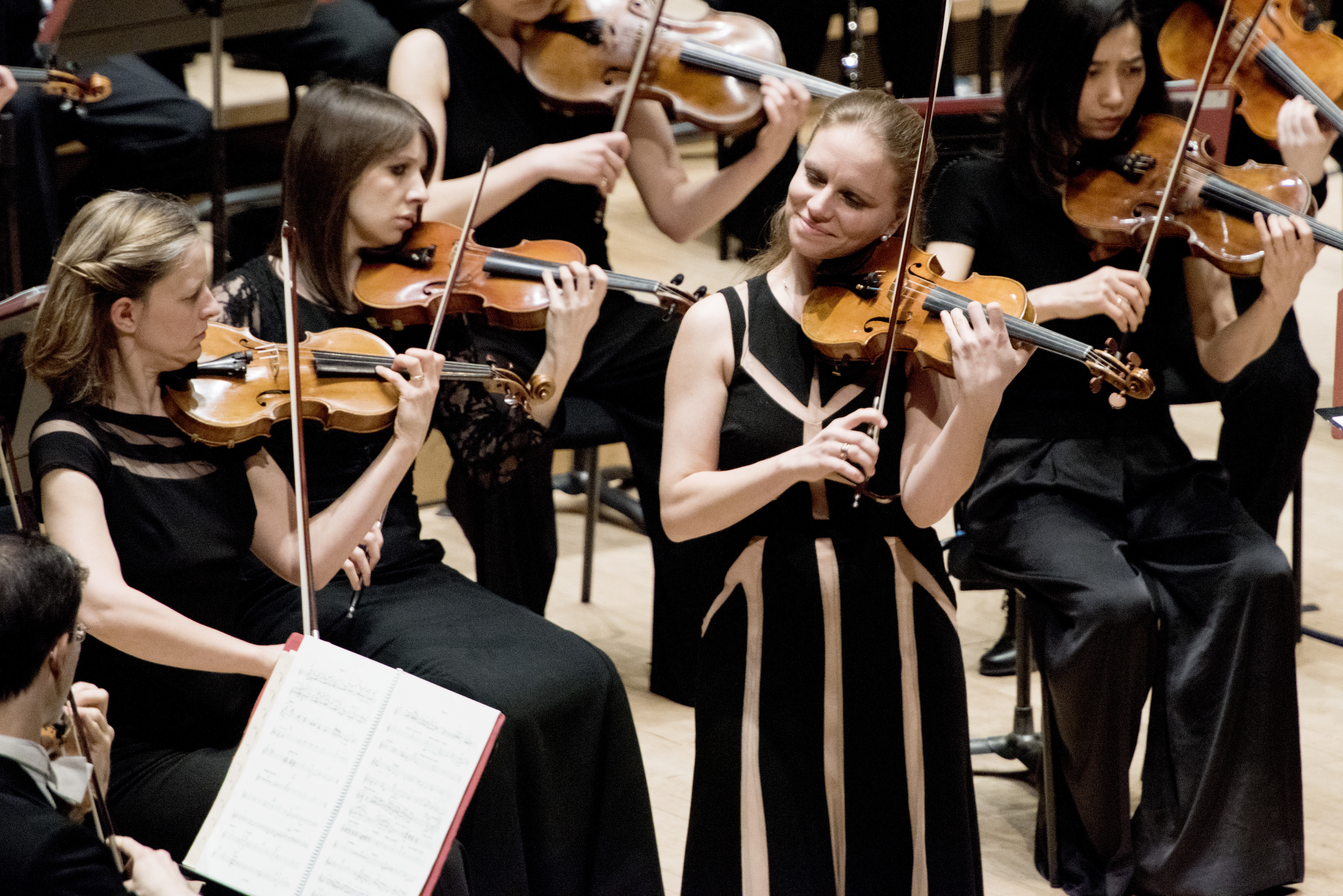 During the Competition a wonderful team of volunteers worked with us. Two of them, Zilin Jiang and Gloria Ting, looked after the Competition’s social media channels, and therefore attended all events from start to finish. They wrote the following notes recording their impressions from the Competition and giving an insight into the festival.

Having arrived from across the globe in the previous few days, the competitors arrived at the Royal Academy of Music to register and meet the Competition team.

The competitors all gathered in the Duke’s Hall for the drawing of the performance order in the afternoon. The drawing was led by Gordon Back, Pamela Frank and Joji Hattori, who warmly welcomed the competitors before inviting them on stage to pick a number. Rather than viewing this as a competition, Pamela encouraged all competitors to think of the experience as a music festival, to make friends, learn from each other and get involved in as many of the wide array of activities on offer as possible.

That evening we all travelled to the Southbank Centre for the Opening Concert, which featured four prizewinners of past editions of the Menuhin Competition, Rennosuke Fukuda and Jiafeng Chen as well as jurors Tasmin Little and Ray Chen, performing with the Philharmonia Orchestra. Before the concert began Gordon Back and Classic FM’s Catherine Bott introduced the competitors to the Royal Festival Hall audience as “the real stars of the show”. Following this we were treated to inspirational performances from all four soloists, including the world premiere of Roxanna Panufnik’s Hora Bessarabia, which was especially commissioned for the Senior competitors. What a wonderful beginning to 11 days of concerts, events, masterclasses, education and outreach activities, embodying Lord Menuhin’s philosophy that music connects.

Day 1 of the Junior First Rounds featured performances by 12 contestants. The Competition kick-off offered wonderful recitals, and the audience seemed to appreciate the high standard of playing. We overheard someone in the audience remarking that it is difficult for one to believe such young people could produce such beautiful music.

The evening concert with NYOGB and Chad Hoopes was held at the Royal Festival Hall. The concert opened with Stravinsky’s Fireworks before Hoopes’s entrance for Michael Daugherty’s Fire and Blood. The audience seemed to respond enthusiastically; its witty and modernistic twists occasioned small outbursts of laughter. Chad returned with a Telemann piece for the encore. Chad had performed the same piece in the Menuhin Competition 2008, where he won the Junior 1st Prize, and before playing it again tonight he expressed how much the piece meant to him as a musician.

Day 2 of the Junior first rounds featured another 10 very talented young violinists. The results were announced at 17:00 in the David Josefowitz Recital Hall. Pamela stressed the importance of remembering that results do not matter, and she was grateful that everyone played ‘from their hearts’.

The day ended with a lovely performance by Yehudi Menuhin’s son and London 2016 juror Jeremy Menuhin, together with his wife Mookie Lee Menuhin and violinist and juror Dong Suk Kang. The evening was the perfect close to a day of wonderful music.

Day 1 of the Senior First Rounds featured 12 senior contestants. Audience were intrigued by the ‘foot stomping’ section of the Panufnik’s Hora Bessarabia and many asked for the name of this new commission.

Following day 1 of the Senior First Rounds we went to JW3 for the Alternative Menuhin concert that was presented in partnership with the Jewish Music Institute. This evening celebrated Menuhin’s iconic collaborations with Ravi Shankar and Stéphane Grappelli as well as his love of Celtic music. Tcha Limberger, John Etheridge, Dave Kelbie and Andy Crowdy’s homage to Menuhin and Grappelli was particularly spectacular, culminating in them being joined by the JMI’s Artistic Director Sophie Solomon for the grand finale.

The first half of Senior competitors in the drawing order offered a day of performance at a very high standard. Each interpretation was quite different from all others, with a few particularly standing out.

Rennosuke Fukuda opened the Lark Insurance Junior Prizewinners’ Concert with the prelude of Bach Partita No. 3. Gordon Back explained that the repertoire was agreed on between the musicians shortly before the concert, and therefore they decided to talk the audience through the choice of repertoire instead of handing out programmes. This made the whole listening experience more engaging, and listeners learned why certain pieces were chosen for this particular occasion. One of the highlights of the evening was Rennosuke’s beautiful encore, Salut d’amour. Kerson Leong led the second half of the concert, receiving many well-deserved ‘bravos’ from the audience. The two violinists and Gordon returned with Sarasate’s Spanish dance Navarra for the encore. The audience loved the piece’s witty and comical character; it was the perfect way to conclude the evening.

The Junior semi-finals featured some of the most virtuosic pieces in violin repertoire. Samuel Tan’s Sarasate’s Zigeunerweisen and Kevin Miura’s charismatic performance of Sarasate’s Carmen Fantasy continued to astonish. Anne Luisa Kramb showed absolute control of Notturno Tarantella; the piece was constantly progressing and changing, which she displayed beautifully with varying tone colours. Yesong Sophie Lee’s Carmen Fantasy was extremely impressive; every single note was sensitively crafted with thought and character. Her body language and communication with the chamber musicians and accompanist showed a high level of musicianship.

Pamela congratulated all the semi-finalists, and stressed that she had forgotten how old they were during the recitals —the ‘highest compliment’ she could ever give.

In the evening we went to the Yehudi Menuhin School, where violinist, vice-chair of the jury and President of the Menuhin Competition Trust Joji Hattori performed with The Yehudi Menuhin School Orchestra. It was evident how much the orchestra enjoyed playing with Joji, a world-class musician who charmed the audience with his wonderful music-making.

The Jury panel sat on the balcony for the Senior Semi-finals. Recital lengths were extended, with some reaching 40 minutes. Waxman and Sarasate’s Carmen Fantasies were a popular choice today.

Before announcing the results, Gordon thanked all the chamber musicians and official accompanists; not only for their outstanding performances, but also the huge amount of support they had given the competitors. Pamela said that the semi-final had contained one of the most challenging sets of repertoire of any Menuhin Competition.

Remus Azoitei and Eduard Stan performed the evening concert in the Duke’s Hall. They are renowned as some of the finest interpreters of Enescu’s music. This concert has a particular significance as Enescu was Yehudi Menuhin’s teacher, and his works heavily featured in the Competition repertoire. This concert really felt like a celebration, and the audience seemed very receptive to that.

Some of the Jurors of this year’s Competition each led a 2-hour Masterclass at the Royal Academy of Music. One of the highlights came during Julia Fischer’s session when a student had trouble mastering a technically challenging passage. Julia emphasized that in order to secure something difficult, one should practice in extra uncomfortable conditions. Having said that, she demonstrated how to play a violin while lying on the back! The student and the audience were amused by this gold advice.

The evening concert took place at Temple Church and featured works of Vaughan Williams, Elgar and the world premiere of John Rutter’s Visions. The soloists, Ning Feng and Kerson Leong arrived earlier to rehearse with the conductor, the Temple Church Boys’ Choir and John Rutter. Doors opened at 19:00, and guests slowly made their way in. There were a few latecomers, but they nevertheless listened attentively and commented on the high quality of the performance. The church proved to be an incredible concert venue, with beautiful architectures and sublime acoustics which fully carried the resonating sonorities of the Boys’ Choir.

Ning Feng repeatedly addressed the issue of vibrato in his masterclass today. He stressed that even though it is a highly personal discipline, we must retain a cautious mind when using it. Vibrato, ‘like salt and pepper’ can only create the most extraordinary taste when added in the right place in the right amount. He also commented on the importance of varying tone colors; the trick of slightly ‘holding back’ at appropriate moments, rather than pouring out everything in one go— excellent advice that would take the students one step further in their tone production. The specialist masterclasses on Enescu (given by Remusi Azoitei) and Bartók (given by György Pauk) gave us a fascinating in-depth insight into the interpretation of the works of these composers, on which the competitors had been working so hard in the lead-up to the Competition.

The Junior Finals opened with Kevin Miura. In ‘Shpigl’ by Oscar Colomina i Bosch, the violinist begins playing from outside, making his/her entrance into the hall, and eventually onto the stage, while playing. Audience on the balcony were not aware of this at first and leaned forward to see where the sounds were coming from. Apart from the commissioned work, each finalist played a movement from Vivaldi’s Four Seasons, with the Yehudi Menuhin School Orchestra. During the interval, several audience members commented on how they loved the way the finalists ‘moved with the orchestra’. Competitors demonstrated their musical maturity not only as soloists, but also the ability to confidently direct an orchestra at such a young age.

Orpheus Sinfonia opened the Family Concert with Tchaikovsky’s Romeo and Juliet Fantasy Overture, followed by Sarasate’s Carmen Fantasy by Junior 2nd Prize winner Kevin Miura. The only unfortunate bit was when Kevin’s violin went out of tune half way through the performance. The effort to carry on was evident, but the amount of double-stops left him no choice but to stop and tune before continuing. The orchestra patiently waited and the conductor gave him a reassuring smile before they continued and finished the piece brilliantly. The concert finished with The Composer is Dead, with text by Lemony Snicket, narrated by the fabulous Nicholas Parsons wearing a jacket that he had acquired 20 years ago when performing in the Rocky Horror Show.

The senior finalists each played a Romantic violin concerto. The four competitors seemed pleased as they returned backstage and the conductor congratulated them all. Ziyu He won 1st Prize and SongHa Choi was awarded the Audience Prize.

Our last day working with the Competition started with the foyer performances at the Southbank Centre. Some of the competitors played at the central bar and people were absolutely charmed. Ariel Horowitz was leading the session and her bubbly personality, together with the brilliant music-making and the informal atmosphere kept both adults and children still on their seats for the whole session. This was followed by a speed-mentoring session in the Clore Ballroom, which was well-attended.

We then moved to the Level 5 Function Room for the Prizegiving ceremony, where the additional prizes were announced. Some of the recipients were bowled over with the news that they had won multiple prizes, and their genuine excitement and joy was simply contagious.

The Closing Gala Concert offered a final rush of emotions with the performances from the two 1st Prize winners and from the beautifully executed Bartók Violin Concerto by Julia Fischer. Right before the second half of the concert, the traditional “Passing of the bow” ceremony took place – British competitor Louisa Staples entered the hall from the left hand side, while British competitor Juliette Roos, who is studying in Switzerland, entered from the left hand side. Louisa played Greensleeves and then passed the bow onto Juliette who played a traditional Swiss yodeling tune and left the hall. We felt like we caught a glimpse of Geneva 2018 while watching her walking out of the Royal Festival Hall.