We are thrilled to announce the winners of the Menuhin Competition Richmond 2021! The Junior Finals took place earlier this evening and you can relive the entire event for free on our YouTube channel. The Junior prizewinners are:

Congratulations to all of the winners!

We would also like to offer our congratulations to Keila Wakao, who was awarded the Junior Composer Prize for her performance of Mason Bates’ Bound Away in the Junior Finals.

Read on to find out more about each of our prizewinners.

Keila Wakao, 15, was born in Boston, Massachusetts. She comes from a musical family – her mother plays the piano, and her father is an oboist. She began playing the violin at age three and, at just nine years old, she gave her solo debut with the Metrowest Symphony Orchestra. Since then, she has performed as a soloist in the United States, Germany and Japan. In 2017, Keila was invited to speak and perform at TEDx BeaconStreet. She currently studies with Donald Weilerstein and Soovin Kim from the New England Conservatory of Music. Her two main musical inspirations are Augustin Hadelich and her father, Keisuke Wakao.

Edward Walton, 15, is from Melbourne, Australia. He started playing the violin at three years old and cites David Oistrakh as a musical inspiration. He has recently been enjoying Oistrakh’s interpretation of Karol Szymanowski’s Mythes. He studies with Dr. Robin Wilson, Head of Violin at the Australian National Academy of Music, and has won top awards at numerous competitions, including the Il Piccolo Violin Magico Competition and the US Medallion International Concerto Competition.

Hannah Wan Ching Tam, 15, is from Hong Kong, China. At 12 years old, she was admitted to the Curtis Institute of Music, where she currently studies with Ida Kavafian. Hannah has performed as a soloist with orchestras including the Hong Kong Philharmonic and the Virtuosi Italiani Orchestra. She loves performing and the diversity of repertoire for violin, which allows her to explore the full range of emotion and experience.

Kento Hong, 14, was born in New York. He made his orchestral debut when he was just eight years old. At ten, he entered the Julliard Pre-College programme, where he currently studies with Dr. Anne Setzer. When Kento learns a new piece of repertoire, he begins by learning about the composer and era during which it was composed. He is inspired by violinists like Jascha Heifetz, David Oistrakh and Maxim Vengerov.

Boha Moon, 14, was born in South Korea and recently moved to the Czech Republic, where she studies with the concertmaster of the Czech Philharmonic Orchestra, Josef Špa?ek. She previously studied at the Korea National Institute for the Gifted in Arts with Professor Nam-Yun Kim. She is particularly inspired by Maxim Vengerov, and listened to his recordings while preparing for the Competition. When not playing the violin, she also plays piano. 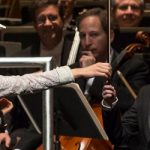 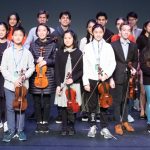