We are thrilled to announce the winners of the Menuhin Competition Richmond 2021! Four Senior Finalists performed recitals which were streamed online tonight, which you can watch for free on our YouTube channel.

Our Senior prizewinners are:

Congratulations to all of the winners!

Read on to find out more about each of our prizewinners.

María Dueñas, 18, was born in Granada, Spain. She currently lives in Vienna, Austria, where she studies with Boris Kuschnir at the University of Music and Performing Arts Graz and MUK. Music has always been a part of her life, as she grew up attending classical concerts and listening to recordings from violinists like Yehudi Menuhin, Jascha Heifetz and David Oistrakh. At 15, she made her debut at the Vienna Musikverein, and since then has performed at venues including the Tchaikovsky Concert Hall and the Elbphilharmonie Hamburg.

Simon Zhu, 20, began playing the violin at six years old. He studies with Professor Tomasz Tomaszewski at the Julius-Stern-Institute of the University of Arts in Berlin and privately with Ning Feng. A scholarship holder of the German Music Foundation, he has been awarded 1st Prize awards at competitions including the Zhuhai Mozart Competition, Schöntal Competition and the Valsesia Musica Competition. He particularly enjoys playing Beethoven, saying he finds a unique energy in his work.

Hana Chang, 18, is from Lexington, Massachusetts and began playing the violin at four years old. After giving her solo debut at seven years old, she has continued to perform across the United States. She currently studies at the Curtis Institute of Music with Ida Kavafian and has performed as a soloist with orchestras including the Prague Radio Symphony, Czech Virtuosi, Utah Symphony and Hunan Symphony. She loves to play Bach’s Sonatas and Partitas for Solo Violin, or anything by Schubert. 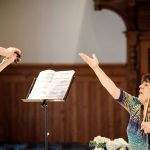 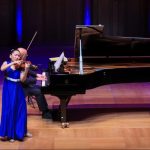